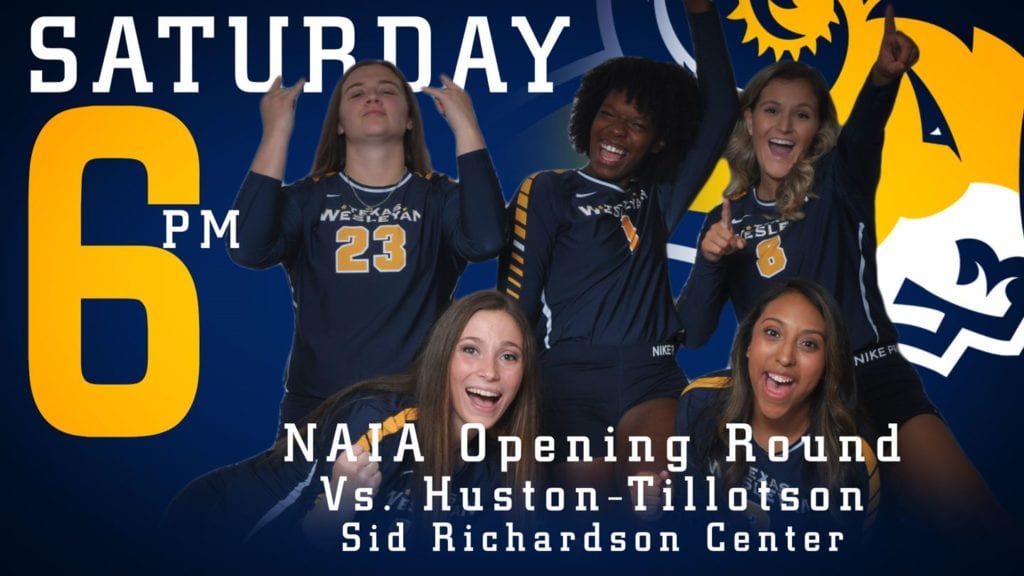 The NAIA has announced Texas Wesleyan as a host site for 2019 NAIA Volleyball National Championship Opening Round. The Lady Rams will host Huston-Tillotson this Saturday, Nov. 23 at 6 p.m. at the Sid Richardson Center. The NAIA released the 44-team event qualifiers and sites on Monday.

12 National Championship Opening Round matches will take place all around the country, including one in Fort Worth. The six winners will move on to national championship final site at the Tyson Event Center in Sioux City, Iowa from Dec. 3-7.

Tickets for admission to the Opening Round Match at the Sid Richardson Center:

Can’t make it to the game? Watch the action online in HD at www.RamSports.net/Live. Live Stream Broadcast price: $7.95

The TXWES Lady Rams and HTU Rams are set for a Texas Clash at the Sid Richardson Center this Saturday at 6 p.m.

The Road to the Opening Round

The Lady Rams were picked second in the SAC, and didn’t disappoint, taking second in the regular season standing before finishing as the SAC Tournament Runner-Up.

The team hit its stride after a 5-set win at Wayland Baptist propelled a stretch of 44-4 in sets. TXWES has two streak of eight straight wins, going 16-1 heading into the SAC title match, the lone loss to No. 16 Oklahoma City.  The team will be playing in its 11th NAIA national tournament all-time, and return to the tourney for the third consecutive season.

The HTU Rams were picked as the favorite to win the RRAC in the preseason poll, and did just that. Huston-Tillotson went 24-5 and 11-1 in conference play to secure the regular season title, but it was the conference tournament they needed to win for an automatic bid to nationals.

The HTU Rams were down 2-1 to Our Lady of the Lake in the Red River title, a team that gave HTU its only conference loss back on September 13 in the conference opener. HTU powered through, winning the fourth set 25-16, and taking the fifth 25-11 to win the conference championship and the bid to nationals, the very first in program history. The HTU Rams are currently receiving votes in the NAIA Top 25 poll.

The 2018 national champion Park (Mo.) returns to the championship as the American Midwest Conference Tournament Champion. The Pirates entered the 2019 season at No. 1 and return to the No. 1 spot in the Top 25 poll for NAIA postseason.

Indiana and Missouri yield the highest number of championship qualifiers with four each. Illinois, Iowa, Nebraska and Oregon followed with three.

Saint Mary (Neb.) returns to the championship field after a 12-year drought. The Flames return to the national championship for the first time since 2006.

Final Site Tournament Information
The top 19 seeds and championship host Morningside (Iowa) automatically advance to the national championship final site in Sioux City, Iowa. Action inside the Tyson Events Center starts with three days of pool play from Dec. 3-5. The top two teams in each pool will advance to the elimination bracket on Dec. 6, and the national champion will be crowned Dec. 7 with first serve set for 7 p.m. CST on ESPN3.
This year’s field includes 36 automatic qualifiers, 7 at-large selections and one host berth (Morningside). The automatic berths are determined by regular-season champions or runner-ups, conference tournament title winners or runner-ups. The remaining at-large bids were determined by the final regular-season Women’s Volleyball Coaches’ Top 25 Poll announced Monday. Final site pools will be determined on Sunday, Nov. 24, and released by 5 p.m. CST
The NAIA Network – the association’s official video-streaming home – will broadcast all matches excluding the semifinals and championship matches live at the 2019 NAIA Volleyball National Championship final site in Sioux City, Iowa. The video platform, powered by Stretch Internet, allows users access to live video, statistics and social interaction on a number of devices, including mobile. Single-day passes can be purchased for $9.95, while a pool play pass is $24.95 (Dec. 3-5) and a championship package is available at $39.95. You can also buy an All-Championship pass and watch every championship streamed on the NAIA Network in 2018.
The semifinal and championship matches will be streamed via ESPN3.