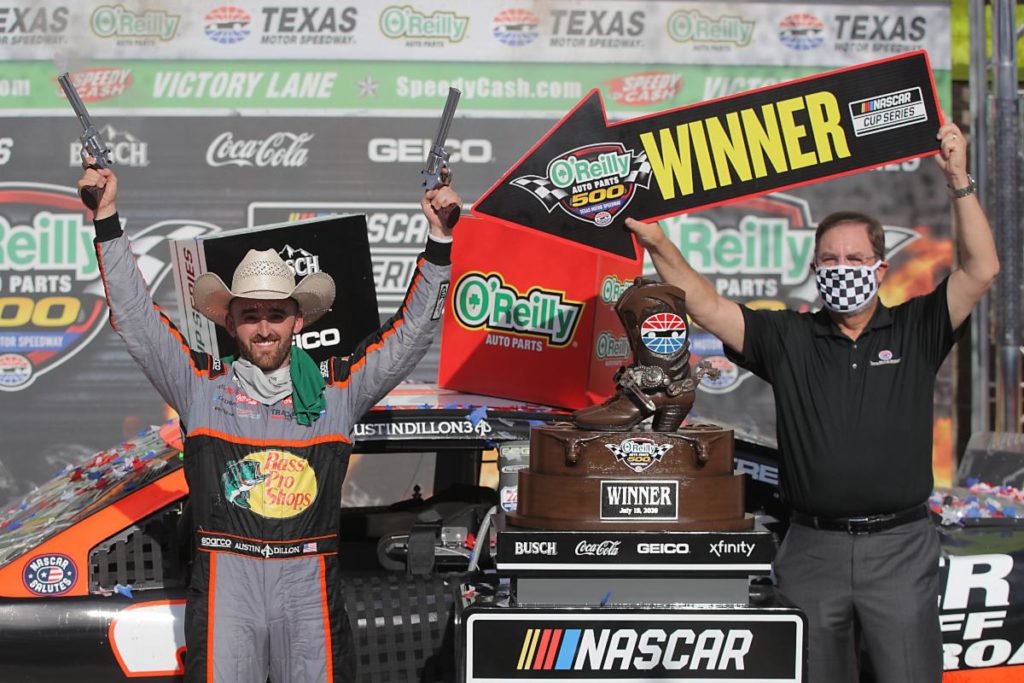 The O’Reilly Auto Parts 500, rescheduled from its original March 29 date due to the COVID-19 pandemic, was the first major sporting event with Texas with spectators since the shutdown.

The eldest grandson of team owner and NASCAR Hall of Fame Inductee Richard Childress traded the top spot with his teammate three times in the final 27 laps and three caution periods before taking the lead for good at the beginning of a two-lap dash to the checkered flag. Dillon’s No. 3 RCR Chevrolet crossed the finish line 0.149-of-a-second ahead on Reddick’s No. 8 RCR Chevrolet for his third career series win.

“I’ll take that,” said Dillon. “Tyler Reddick, he raced me clean. 1-2 for RCR – this has been coming. We’ve had good cars all year. Justin Alexander (crew chief) and my whole crew. I got my baby Ace back home and my wife, I love them so much.

“I had to change it up a couple of times. Definitely had to earn it. I changed it up. I waited the second one and I went on the last one. So, it worked out for me good.”

The Stewart-Haas Fords of polesitter Almirola and Harvick dominated the early going, splitting the lead over the first 62 laps of the 334-circuit race at No Limits, Texas. The Joe Gibbs Racing Toyotas of Martin Truex Jr., Kyle Busch and Jones led for a combined 11 laps before Team Penske’s Ryan Blaney powered to the front to take the Stage 1 victory.

The list of the eight different drivers who paced the field in the 105-lap second stage included Blaney, Kyle Busch, Denny Hamlin, Logano, Jones, Harvick, Almirola and Truex. But it was Blaney who took back the lead on Lap 190 to earn his second stage win of the race.

The only caution of Stage 2 occurred on Lap 118 when seven-time Texas Motor Speedway winner and seven-time NASCAR Cup Series Champion Jimmie Johnson tagged the wall exiting Turn 4. Despite damage to the No. 48 Hendrick Motorsports Chevrolet, he was able to continue and finished 26

With just one on-track incident bringing out the caution flag in the first 210 laps, the final 134 laps proved to be quite the opposite.

A 12-car pileup on the front straight on Lap 220 forced NASCAR to red flag the competition for 11 minutes and 29 seconds. The summer Texas heat was only intensified for the drivers as they sat inside their race cars, with temperatures eclipsing the 130-degree mark. NASCAR officials handed out bottles of water to the competitors during that time and racing resumed on Lap 225 with Keselowski leading the field.

Two more cautions slowed the on-track competition between Laps 244 and 255, setting up the RCR battle for the win.

Reddick was able to get his No. 8 RCR Chevrolet out of the pits first during a caution on Lap 308 with Dillon’s No. 3 RCR Chevrolet right behind. The NASCAR Cup Series Rookie of the Year contender led four laps under caution but Dillon grabbed the lead when green-flag racing resumed on Lap 312. He stayed at the point for 12 laps which included the ninth of the day’s 10 cautions. Reddick got a good jump on the restart to lead Lap 224 but Dillon battled back to the top spot one lap later.

The race’s final caution bunched the field on Lap 330 but Dillon was able to get out in front on the final restart on Lap 332 heading into Turn 1 and never looked back.

Next on the Texas Motor Speedway competition calendar is the NASCAR Texas 500 weekend scheduled for Oct. 24-25.