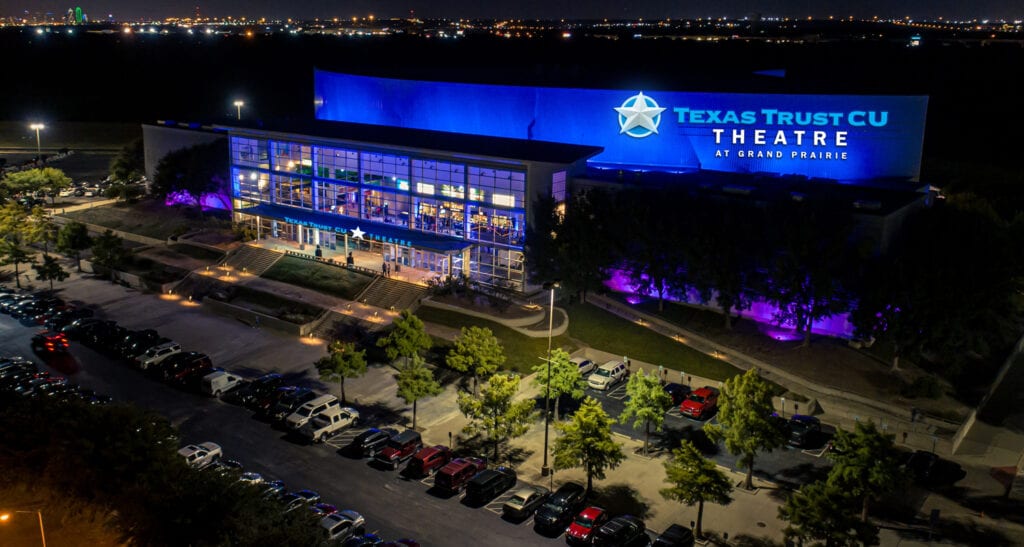 Effective immediately, the theatre – operated by AEG Presents and owned by the City of Grand Prairie – will be known as the Texas Trust CU Theatre at Grand Prairie.

The multi-year sponsorship, brokered by AEG Global Partnerships, affirms the unique and long-standing bond that Texas Trust shares with Grand Prairie and the surrounding communities. Marquee signage for the newly named Texas Trust CU Theatre will be visible from I-30 to hundreds of thousands of people each week.

The theatre, conveniently located adjacent to Lone Star Park, is known for being one of the most versatile concert venues and private event spaces in the country. With a capacity of more than 6,500 guests, it hosts events covering all music genres, as well as corporate gatherings and award shows.

The two-level theatre features state of the art sound, lights, and LED video walls, as well as luxury suites with private bars for entertaining VIPs.

Backstage features hospitality rooms and the 8,000-square-foot lobby can be used for receptions, dinners, galas, and private events and concerts.

Since its opening in 2002, the theatre has hosted world-class artists including a variety of rock, country, and comedy shows (Eagles, The Killers, The Lumineers, Dolly Parton, Sturgill Simpson, Kacey Musgraves, Steve Martin, and Tyler Perry), popular hip-hop, R&B/soul, pop and Latin concerts (Tyler, The Creator, Maze, BTS, and Bad Bunny), as well as family-friendly performances and events (Paw Patrol, Hillsong United, and Toby Mac), among many others.

“Texas Trust Credit Union is an integral part of every community we serve, which means more than just doing business here,” said Jim Minge, CEO of Texas Trust Credit Union. “We are an active supporter of the Grand Prairie Independent School District, The Grand Prairie Education Foundation, the Chamber of Commerce, and a number of Grand Prairie-based non-profits. This partnership allows Texas Trust to reinforce our commitment to the city and support a world-class venue that will offer high quality entertainment while also providing substantial economic benefits to the city.”

“We are thrilled two Grand Prairie staples are joining forces with this partnership between Texas Trust and the Theatre at Grand Prairie,” said Mayor Ron Jensen. “Both have deep roots in our community, are very involved in making Grand Prairie friendly and progressive, and are perfect community partners. This partnership is music to my ears.”

“As the public appetite for live events is reinvigorated, we are thrilled to bring the Texas Trust CU name to The Theatre at Grand Prairie,” said Andrew Klein, Managing Director of AEG Global Partnerships. “Texas Trust has been a valued member of the Grand Prairie community for over 70 years, and together we look forward to continuing to provide unparalleled live entertainment experiences for the residents of Grand Prairie.”

The Texas Trust CU Theatre at Grand Prairie represents the credit union’s ongoing commitment to the people and city of Grand Prairie as well to the entire region.

For more information about the Texas Trust CU Theatre at Grand Prairie and/or to purchase tickets to upcoming events, please visit TexasTrustCUTheatre.com.

In this article:concerts, grand prairie
Up Next: