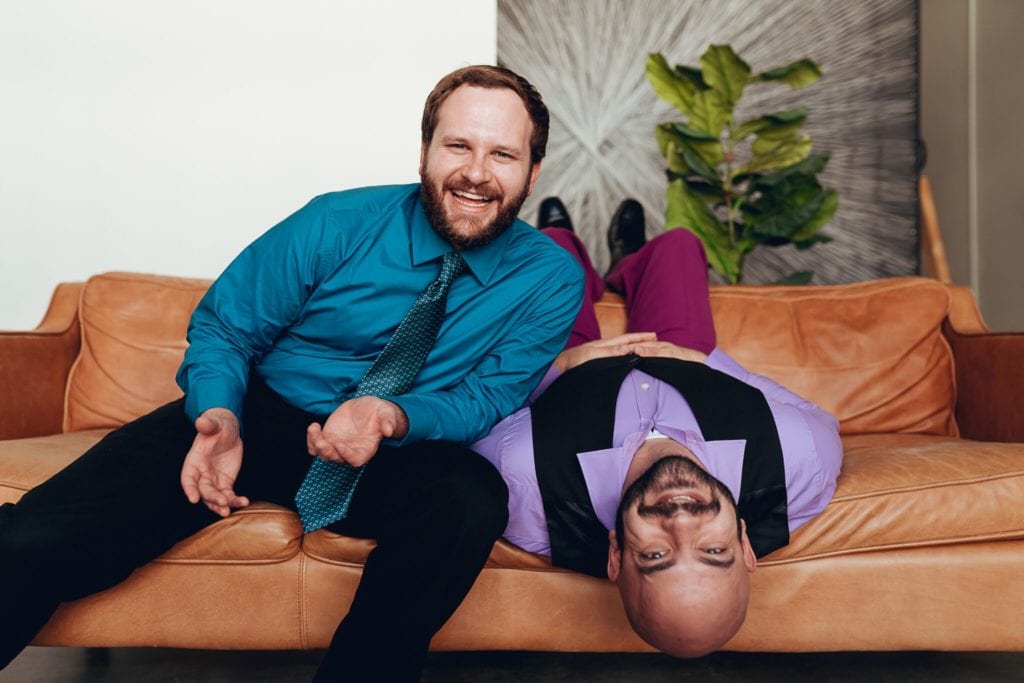 Amphibian’s 20th anniversary season has been a roaring success so far, with seats for the often-sold-out performances in high demand. Gutenberg! The Musical! is set to continue this trend – as Theater Jones noted in 2009 “From start to finish, the ridiculously goofy Gutenberg! has a random-orbit wobble that feels exactly like an improv sketch gone rogue. Anything might happen in this show about showbiz… and right now that seems like just the ticket.”

Gutenberg! The Musical! – Amphibian Stage Productions’ third main stage production of 2019 – is a timely choice for their season. The show’s writers, Anthony King & Scott Brown, were 2019 Tony Award nominees for Best Book of a Musical for Beetlejuice. This earlier King & Brown collaboration is not, as one might imagine, the story of Johann Gutenberg – it is the story of Bud & Doug, two enthusiastic showbiz hopefuls trying to get their big break. They are sure their chance at the big-time will come from the musical they have just written – they just need one big Broadway producer to back them.Gutenberg! The Musical! takes place as Bud & Doug present their beloved creation to a roomful of potential investors. Playing all of the roles themselves, the only tools at their disposal are a trunk full of trucker hats and one lonely pianist. Can they persuade these big-wigs to give them a shot?

Absurd and unpredictable, Gutenberg! The Musical! was a hit when director David A. Miller helmed back-to-back productions with Amphibian in 2008 & 2009, and his return as director is a nod to the popularity of the first two runs. This show will be perfect for audiences seeking silly distraction from the Texas summer heat.

Performances Thursday through Saturday will be at 8pm with 2pm Sunday matinees. Friday, July 12 is a private opening night for Amphibian’s Devonian members and press and is available by invitation or with the purchase of a $100 ticket. Saturday, July 13 is the members’ cast party night and is available to non-members with the purchase of a $50 ticket.

About the Performers and Creative Team:

David A. Miller (Director) has directed numerous productions and staged readings for Amphibian, including Below the Belt, Wittenberg,The  Nosemaker’s Apprentice: Chronicles of a Medieval Plastic Surgeon, and previous stagings of Gutenberg! The Musical! As a New York-based director and theatre educator, David has worked with Prospect Theater Company, Brooklyn Arts Exchange, id Theater, Vital Theatre Company, Roundabout Theatre Company, and The Artful Conspirators (Artistic Director, Leaving IKEA, Brooklyn Underground,Open Rehearsal Series), among others. David is currently Associate Professor at Bloomsburg University in Bloomsburg, PA, where he teaches acting, directing, and playwriting, and will direct Everybody by Branden Jacobs-Jenkins in spring 2020. This fall Remembered: Inspired by Rosemont Cemetery, a play on which David is lead playwright, will be produced by Bloomsburg Theatre Ensemble and staged in the cemetery itself. Other plays include The Flames (The Collective NYC), A Lesson in Art (The Artful Conspirators), Mystic in the Savage State (Workshops, Strange Sun Theatre), and Semi-Permanent (Semi-Finalist, Inkslinger). MFA in Directing from Mason Gross School of the Arts at Rutgers University. Drama League Directing Alum. Member, Stillwater Writers (NYC). mrdavidamiller.com

Rebecca Lowrey (Musical Director) earned her Bachelor of Arts degree in Music (with a minor in Business Administration) from Hardin-Simmons University in Abilene, Texas. She most recently directed a sold-out run of The Best Little Whorehouse in Texas (GLCT),  The Rocky Horror Show (NTPA Repertory) and Plaid Tidings (Theatre Arlington) and a few of her recent credits as music director includePutting It Together (ONSTAGE in Bedford); The Drowsy Chaperone,Mary Poppins,Thoroughly Modern Millie, The Fantasticks, and Billy Elliot (Firehouse Theatre); Urinetown and Nunsense (Theatre Arlington); Cabaret (Runway Theatre); Legally Blonde and Hello, Dolly! (Denton Community Theatre); and Spamalot (GLCT).  In 2018, she won the Column Award for Best Musical Director – Equity for her work on A Man of No Importance (Brick Road Theatre). She has also served as pianist for many area churches and accompanies for UIL solo competitions in the DFW Metroplex. Rebecca’s day job at Romeo Music combines her passion for technology with her love of teaching and performing. She is also highly sought after for vocal coaching and audition prep sessions for local actors. www.accompanymusicals.com

Jovane Caamaño (Doug Simon) is also making his Amphibian debut with this production. He has previously appeared in Everybody (Stage West), The Lady from the Sea (Undermain Theatre), Enemies/People(Second Thought Theatre), This Random World (Circle Theatre),Susan and God (Theatre Three), the national tour of Rudolph, the Red-Nosed Reindeer the Musical (Wishing Star Productions), and three seasons with the Trinity Shakespeare Festival. He will next be appearing in Red Chariot at Undermain Theatre in Deep Ellum this fall. He graduated from Texas Christian University with his B.F.A. in Theatre with an emphasis in Musical Theatre.

The Music of Pink Floyd-Concerts In The Garden