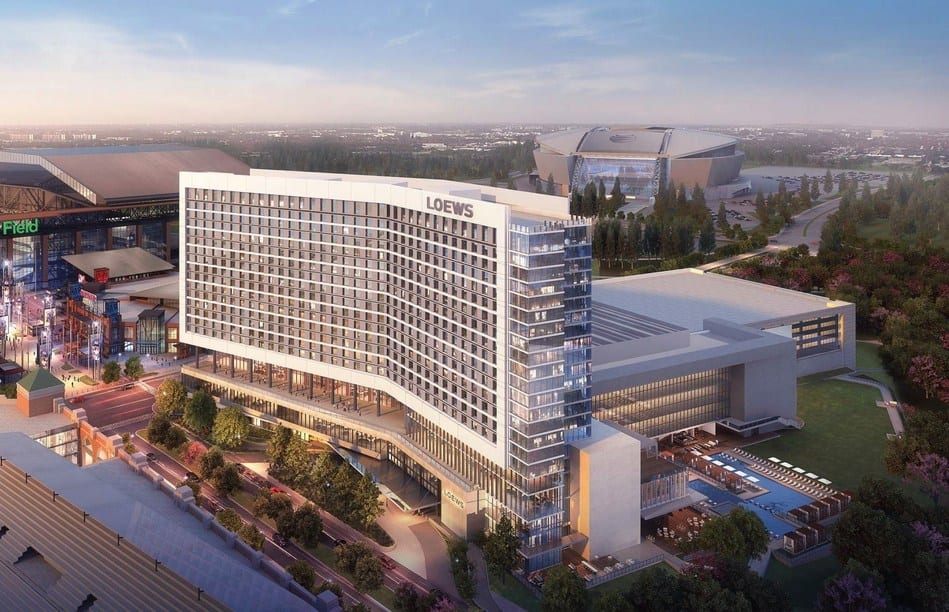 ARLINGTON, Texas — Arlington continues to build on its economic momentum with a planned $810 million expansion of the Entertainment District, which would add a best-in-class hotel brand, new convention center, corporate office headquarters, mixed-use residential building, small business coworking and incubator space, and even more dining, retail, and entertainment options for residents and visitors alike in The American Dream City.

Tuesday evening, the Arlington City Council entered into a public-private partnership over a 30-year period to facilitate the transformative development project, which will further strengthen Arlington’s convention and tourism opportunities and create new revenue, housing and jobs for the community.

The expansion is a continuation of the strong public-private partnership between the City of Arlington, the Texas Rangers, Loews Hotels & Co, a wholly owned subsidiary of Loews Corporation and The Cordish Companies.

The components of the expansion will consist of:

The expansion would bring these partners’ total investment in Arlington, which includes the new Texas Live! and Live! by Loews – Arlington Hotel, to more than $1 billion.

“It’s another great day in Arlington, as we continue to build on the economic momentum in our world-class Entertainment District,” said Arlington Mayor Jeff Williams. “When Loews Hotels & Co, The Cordish Companies, the Texas Rangers and the City of Arlington all come together on a project, there’s no limit to the dreams we can realize here in The American Dream City. This project and the recent National Medal of Honor Museum will add significantly to the city’s sales tax revenue, allow us to continue to keep our taxes among the lowest in the area and provide the quality services our residents have come to expect with minimal public investment.”

This expansion is the next phase of a greater $4 billion vision by the City of Arlington, Texas Rangers, The Cordish Companies and Loews Hotels & Co that began with the $250 million Texas Live!, which opened August 2018, and Live! by Loews Hotel which opened in August 2019.

Together, along with the Rangers’ new Globe Life Field, the total investment of new development by the partnership totals over $2.25 billion. The new mixed-use project will be a major economic engine to the area and is expected to generate approximately $1.8 billion in economic benefits to Arlington and Tarrant County.

“As an owner and operator, Loews Hotels has the advantage of deciding when and where we build hotels. For us to invest significant capital in the new $550 million Loews Arlington Hotel, demonstrates our belief in the great city of Arlington, Texas,” said Jonathan Tisch, chairman & CEO, Loews Hotels & Co. “We look forward to continuing our partnership with the City, The Texas Rangers and The Cordish Companies, and are confident that with the addition of Loews Arlington, the destination will receive national prominence and recognition for hotels and lodging as AT&T Stadium and Globe Life Field did for sports and entertainment.”

“The Texas Rangers are proud to call Arlington our home as the city and its leaders continue to create one of the nation’s premier sports and entertainment destinations,” said Texas Rangers Co-Chairman and Managing Partner Ray Davis. “We want to thank our great partners, Loews Hotels & Co and The Cordish Companies for sharing our vision for the Arlington Entertainment District. With its opening next March, Globe Life Field will be the finest ballpark in Major League Baseball, and the development projects announced this evening are another very exciting addition to the area.”

“It is an honor for The Cordish Companies to continue our partnership with the City of Arlington, the Texas Rangers and Loews Hotels & Co to deliver a transformative project for Arlington,” said Blake Cordish, principal of The Cordish Companies. “Loews is one of the preeminent hoteliers in North America and a leader in the convention and meetings industry. The expansion of Arlington’s Entertainment District, anchored by the new Loews Arlington Hotel and Arlington Convention Center, will create a vibrant mixed-use development and will cement Arlington as one of the leading premier sports, entertainment, culture, hospitality and tourism destinations in the country.”

In this article:featured, loews hotels, Texas Live, Texas Rangers
Up Next: