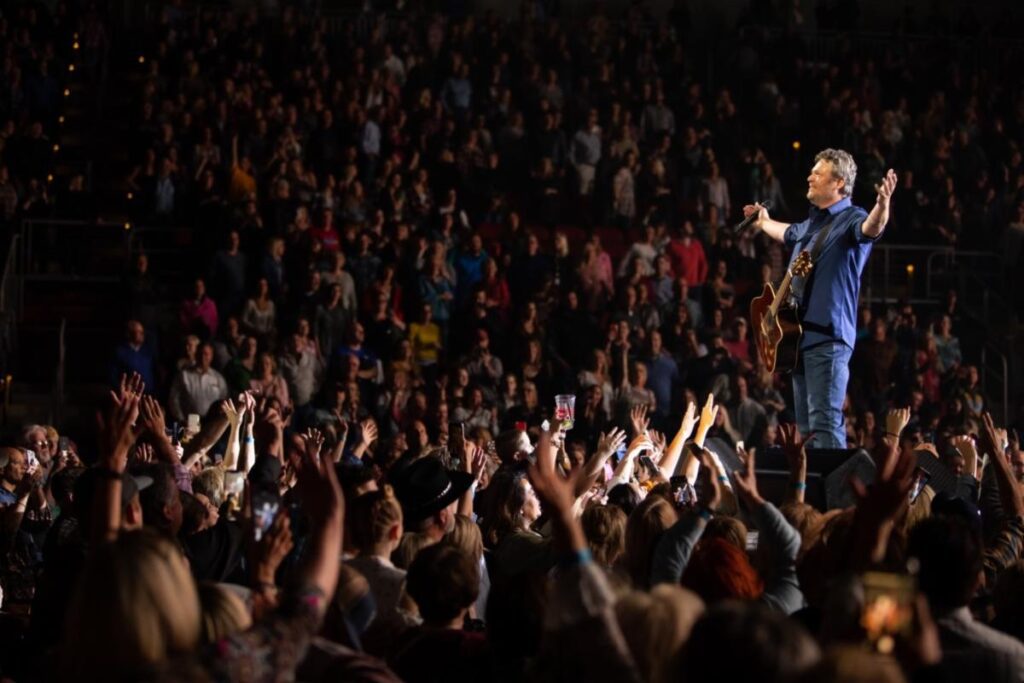 Blake Shelton to Perform at NASCAR All-Star Race at TMS

10-time Country Music Association award winner Blake Shelton to highlight NASCAR All-Star Race pre-race activities with a sixty (60) minute concert (Photo courtesy of Texas Motor Speedway)
FORT WORTH, Texas – Blake Shelton, the five-time CMA Male Vocalist of the Year who has accumulated more than 13 million album sales over his illustrious career, will perform a pre-race concert for the NASCAR All-Star Race on Sunday, May 22, at Texas Motor Speedway.
Shelton will perform a full sixty (60) minute set featuring some of his biggest hits on the venue’s main racetrack.
The concert will be the highlight of the pre-race activities leading into the second running of the NASCAR All-Star Race at Texas Motor Speedway (7 p.m. CT, TV: FS1, Radio: PRN, SiriusXM and 95.9 The Ranch).
Texas Motor Speedway is offering fans premier access to enjoy the concert and the NASCAR All-Star driver introductions with the purchase of a Track Pass ticket upgrade while supplies last.
While the pre-race concert is free with any race ticket, Track Pass holders will move from the grandstands to the front of the stage for the high-energy musical performance, driver introductions, and more.
Shelton added to his musical success this past December with the release of the deluxe version of his latest album, Body Language.
The album featured four new tracks, including his Top 15 and climbing single, “Come Back As A Country Boy.” Body Language (Deluxe) features his Platinum-selling 28th country radio chart-topper, “Happy Anywhere” featuring Gwen Stefani.
Prior to “Happy Anywhere,” Shelton celebrated a 2x Platinum, multi-week No. 1 with “Nobody But You,” which has now reached 300 million streams.
The single made its television debut on the 62nd GRAMMY Awards, where Shelton was also nominated for “Best Country Solo Performance” for his hit “God’s Country.”
The 4x Platinum smash earned the 2019 CMA Award and 2020 ACM Award for “Single of the Year.”
He continues to remain a force in the industry with ACM (5), AMA (3), CMA (10), CMT (11) and People’s Choice Awards (7), among many others.
He also continues to mentor future musical talents as a coach for NBC’s Emmy Award-winning television show, The Voice.
He is an eight-time champion with his most recent title coming with contestant Cam Anthony in May of 2021.
“It only makes sense to have next-level talent like Blake Shelton perform for this festival of fun and part of one of the crown jewels of motorsports racing, the NASCAR All-Star Race,” said Texas Motor Speedway General Manager Rob Ramage. “We are offering a priceless experience for our fans and have countless activities planned for this festival. Keep watching our website, we will have so many other next-level fan experiences to announce. It’s going to be huge, something for everyone, and we are so excited to have this super star, Blake Shelton, perform live during our All-Star Race and festival.”
The NASCAR All-Star Race will be the marquee event of a race weekend featuring all three of NASCAR’s premier series. The SPEEDYCASH.COM 220 NASCAR Camping World Truck Series race will be held Friday, May 20, at 7:30 p.m. and the Texas 250 Xfinity Series race on Saturday, May 21, at 12:30 p.m.
Both will be televised live on FS1 and aired locally on 95.9 The Ranch.
Tickets for the NASCAR All-Star Race begin as low as $35 for adults & $10 for kids 12 and under.
For more ticket and race weekend information, please visit www.texasmotorspeedway.com.
Keep track of all of Texas Motor Speedway’s busy schedule by following on Facebook, Twitter and Instagram.
Keep up with all the latest news and information on the speedway website and TMS mobile app.
Newsletter Signup

In this article:blake shelton, concerts, featured, Texas Motor Speedway
Up Next:

Duran Duran Will Play at Dickies Arena in August