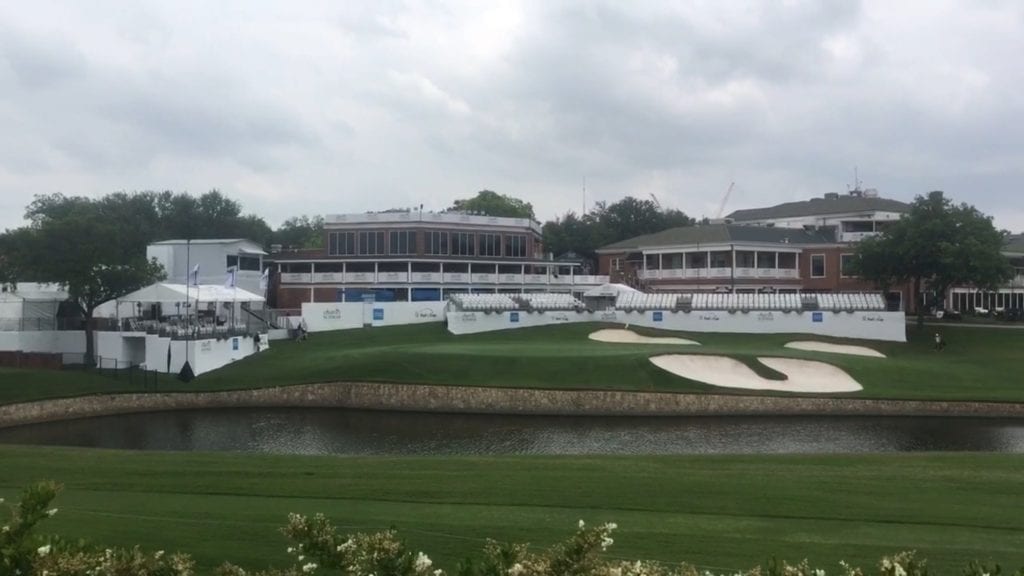 View of the No. 18 green from the Champions Club. Photo credit: Jay Betsill

By Rick Press and Jay Betsill

In 2018, Colonial Country Club was forced to put on its historic PGA tournament without a title sponsor, which is the pro golf equivalent of a year without a Santa Claus.

Gourmet grocer Dean & DeLuca bailed, and Colonial had to scramble to keep its seven-decade tradition alive. Several local companies (American Airlines, XTO Energy, BNFS, and AT&T) stepped in to fill the void, and when superstars Justin Rose and Brooks Koepka dueled it out on Sunday, with Rose slipping on the plaid jacket, the so-named Fort Worth Invitational seemed to have dodged a bullet.

Fast-forward to 2019, and Colonial’s stock is rising.

Investment powerhouse Charles Schwab signed on as title sponsor for the next four years, and seven of the top 15 players in the world have committed to tee it up at Hogan’s Alley this Memorial Day weekend.

In honor of Colonial’s improving portfolio, we’ve got nine can’t-miss tips for fans on how to invest their time and money at this year’s Charles Schwab Challenge. It’s a buyer’s market.

1. Best day(s) and times to attend: In our humble opinion, any day spent walking the emerald fairways of Colonial is a good day. But if you must choose, here are some of our favorite options.

— Thursday morning: There’s nothing quite like watching the first shot off No. 1, with the Wall of Champions sparkling in the background. This year, past champions Tom Purtzer and Keith Clearwater get the honor. You also get to see the full field up close on Thursday because crowds typically build as the week progresses. Finally, this year Charles Schwab is challenging patrons and players to participate in Throwback Thursday by wearing 1970s attire. Fans decked out in disco duds or other 70s looks will get 73% off food and non-alcoholic beverages at tournament concessions. And they just might get to see Jason Dufner rocking some bellbottoms and gold chains!

Friday afternoon: Happy hour at Colonial is the perfect excuse to cut out of work early, grab a margarita, hang with the beautiful people and watch the players try to keep make the cut.

All day Saturday: It’s moving day and we like to get swept up in the morning wave because usually someone goes low. Then we recommend fueling up at Party Hole and following the lead groups as they tee off around 1 p.m.

Sunday afternoon: Walk the Horrible Horseshoe (holes 3-5) with the leaders, because that stretch should play a big role in who puts on the plaid jacket Sunday evening.

2. Tickets, grounds passes and parking: Over seven decades, Colonial has built up so much community support its pretty common to find friends with local companies tied into the tournament. Work your connections and you might end up with a free ticket or two.

If you must buy, tickets are available online and at local Tom Thumb and Albertson’s stores. A daily grounds pass retails for $50. Weekly pass is $125. But check for discounts. Children 12 and younger are free.

A Champions Club badge is $95 per day or $250 for the week and it provides access to the newly located air-conditioned venue, which this year will have a viewing deck overlooking the 10th fairway and the 18th green.

Parking is $15-$20 a day for lots at Farrington Field and Rockwood Park that provide a shuttle bus to the main gate. You can take your chances with the park and crawl lots closer to the clubhouse, or, better yet, grab an Uber or Lyft to their entrance near the first green.

3. Top players to follow: Defending champion Justin Rose will try to recapture his brilliance from 2018, when he shot 20-under par, the second lowest total in tournament history. Other top-ranked players challenging him this year will include Rickie Fowler, Francesco Molinari, Xander Schauffle, Paul Casey, Tony Finau, Jon Rahm and Bryson DeChambeau. (Those last two missed the cut at the PGA Championship last week, so they’ll be rested and rarin’ to get back in contention.)

Speaking of champs, don’t miss the chance to watch young gun Cameron Champ pump his 350-yard drives out onto the fairways of the par 5s.

Unfortunately, world No. 5 Justin Thomas had to withdraw due to a wrist injury.

4. Favorite food and drink options: The new Ultra Club featuring B&B Butchers & Restaurant and Topgolf tucked in between the No. 8 green and Nos. 9 and 12 tees is open to all fans and will feature $2 off a Michelob Ultra for one minute after every birdie made at No. 8. Bargain shoppers, be ready! Food options on B&B’s menu include the Coach Patterson Burger, Lobster Roll, Wagyu hot dog and Tommy’s Bacon and Sliced Filet Sandwich. If you’re feeling really ritzy, order the Katsu Sando for a cool $160. It features A5 Waygu Ribeye, certified from a cow that lived in a house nicer than yours.

The 1936 Colonial Bar & Grille near the indoor tennis courts building in the spot that previously house the Champions Club has a wide variety of options including the Par-5 burger, Pulled Pork Sandwich, Colonial Crispy Chicken Sandwich, Signature Brisket Tacos, Cowtown Nachos and more.

5. Top watching spots: There is a plethora of prime viewing spots at Colonial! Some of our favorites include the No. 9 fairway under the trees on the right to watch the approach shots over the pond. Or the top of the hill between the Nos. 11 and 12 fairways. You can watch the players try to reach the par-5 11th in two shots and tee off on 12. Both spots provide some much-needed shade.

No list of best spots to watch at Colonial is complete without at least a mention of No. 13 green and No. 18 green. Should you want to venture out to the back northwest corner of the course, the 13th hole is traditionally where the biggest party is taking place in all of Fort Worth.

The 18th green is a hot spot on Sunday, and if you plan to see the final groups coming down the stretch, you can either snag one of the $95 tickets to the Champions Club with its new balcony and panoramic views across the 10th fairway to the No. 18 green; you can stakeout a seat in the bleachers around the green, just arrive early bring plenty of sunscreen; or you can follow the leaders around the majestic course and hope to grab a seat on the No. 10 fairway since they take down the ropes after the final group has made its way through the hole.

6. Fashion advice: You don’t have to be a golf fan to enjoy the fairway runway show at Colonial. Ladies, break out your best sundresses, strappy sandals and chic shades. Floppy hats, optional, but leave the heels at home. Your feet will thank you. Guys, you might want to iron your best golf shirt and shorts so you look sharp in the Instagram pics. Anybody who dresses in 70s attire for Throwback Thursday will have our eternal admiration.

7. Best selfie spots: Colonial is a photogenic golf course, so you can’t really go wrong anywhere you decide to snap a photo. But if you want a few iconic spots, try:

— The Hogan statue, up the stairs behind the 18th green.

— No. 10 fairway, with the 18th green and Colonial clubhouse in the background

— No. 13 tee, looking back toward the water and the crowds at the par 3 party hole.

— The Wall of Champions along the No. 1 tee box.

— The putting green between near the No. 10 tee. Time it right and the friendlier players might pose for a selfie with you.

— The large Charles Schwab Challenge logo golf ball near the entry to the Champions Club is an Instagram-worth spot.

8. Must-have souvenirs: In addition to the usual collection of Colonial shirts, hats, and ball markers, this year there will be a Ben Hogan bobblehead available only on Thursday only. (Are you getting the idea that they want people to show up on Day 1 of the tournament?) Technically, the Hogan bobblehead is free but a $10 donation to the First Tee of Fort Worth is strongly suggested.

And Charles Schwab isn’t leaving the players out of the souvenir mix. The winner of this year’s tournament, in addition to taking home the Leonard Trophy, a plaid jacket and a $1.3 million check, will get a fully renovated and customized 1973 Dodge Challenger. It’s an ode to the year that Charles Schwab was founded, and to the “challenge” that Colonial presents. The car will be on display on the course all weekend.

9. Post-round watering holes: The Woodshed and Hoffbrau are just a few Finau drives from the course. Expect both to be packed with golf patrons all week.

A new addition since last year’s Colonial is the Rogers Roundhouse, the new bar and kitchen that celebrates the Union Pacific Railroad, a major part of Fort Worth’s history.

Across University, and tucked along the Trinity River, HG Sply Co. and Bartaco offer plenty of creative cocktails plus affordable noshes.

In the TCU area, Fred’s on Bluebonnet Circle is a great post-round spot for a burger and a coldass beer. They usually offer drink specials for Colonial badge carriers.

Railhead on Montgomery Street and Angelo’s on White Settlement Rd. are both favorite haunts for patrons and some players hoping to fill up on authentic Texas BBQ.

Heim BBQ has two locations, the original on Magnolia and the new River location on White Settlement Rd. We recommend the Bacon Burnt Ends!

Del Frisco’s Double Eagle Steakhouse in downtown and Joe T. Garcia’s near the Stockyards are two more iconic Fort Worth restaurants where you’re likely to spy a PGA player or three.

Vaqueros knock off Denton 4-3 in thriller