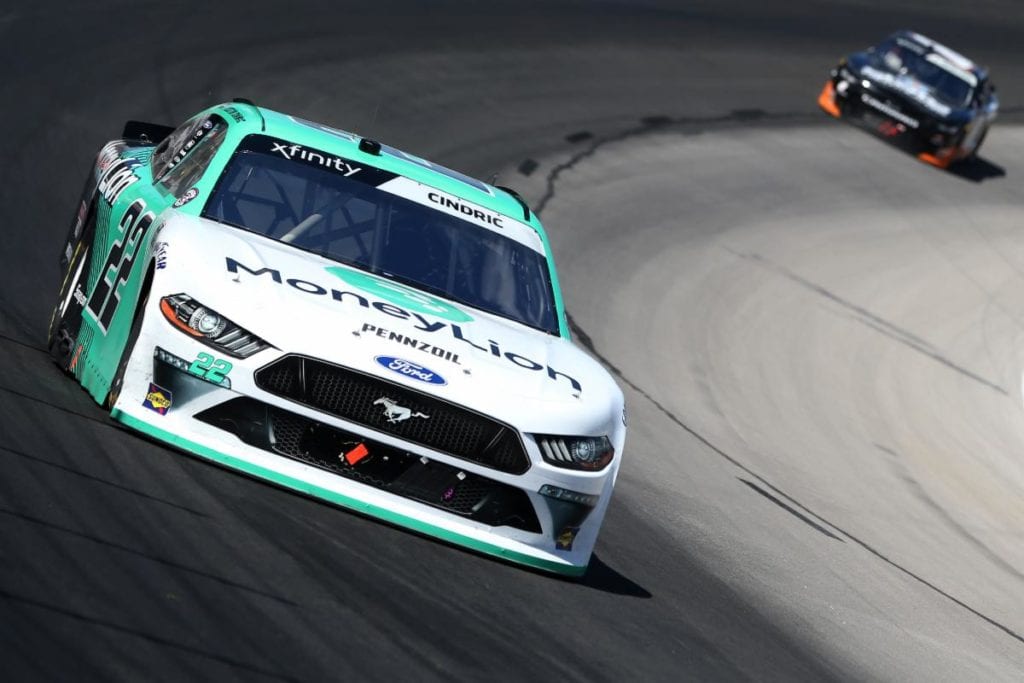 Austin Cindric and his Team Penske Ford crossed the finish line directly behind Kyle Busch in the My Bariatric Solutions 300 but he was awarded the NASCAR Xfinity Series victory when Busch’s No. 54 Joe Gibbs Racing Toyota failed post-race inspection at Texas Motor Speedway.

The victory was the third consecutive and fifth career series victory for the 21-year-old Columbus, Ohio, native. He won back-to-back July 9-10 at Kentucky Speedway in Sparta, Ky.
The My Bariatric Solutions 300 was delayed from its original March 28 date due to the COVID-19 pandemic.
“Obviously, it’s great to be able to get the MoneyLion Ford Mustang in Victory Lane no matter how it happens” said Cindric. “It’s a great points day for that. I just got out of the hauler from getting changed back into my street clothes and saw the 54 and everyone and their brother surrounding the scales, so that’s never a good sign for those guys. I know they race hard and work hard. I want to win it on track. I felt like we had a shot to do that today and maybe didn’t execute as well as we should have and that’s what kept us out, but fast race cars and being in position that’s where it counts.
“A win is a win and it’s great. It’s good for our team. It’s good momentum and obviously it’s great points. If they let me go choose the guns here in a minute I might be a little more excited, but, overall, to get the cowboy hats and do the whole deal here is great. We were a contender all day and I believe we were able to do it, but it wasn’t in the cards in our race. But, you always want to win it on track.”
Busch had been going for his 10
th series victory at No Limits, Texas. He swept both races in 2008 and 2009, won the spring races in 2010 and 2013, the fall race in 2014 and the spring races in 2016 and 2019.
The balance of the revised top-10 finishers were Justin Allgaier, Harrison Burton, Michael Annett, Jeb Burton, Brandon Jones, Justin Haley, Ross Chastain and Brandon Brown.
Annett drew the No. 1 starting spot, taking the green flag first but it was the driver starting in his rearview, Cindric, who would lead the race’s first 34 laps despite the pace being slowed by two cautions during that time.
Allgaier moved his No. 7 JR Motorsports Chevrolet to the point on Lap 35 and went on to win Stage 1. He and Cindric traded the lead back and forth throughout Stage 2, and it was Allgaier who would take the green-and-white checkered flag at the point.
Richard Childress Racing’s Anthony Alfredo led at the beginning of the final stage and would lead twice for nine laps before tagging the wall coming off Turn 2 on Lap 108 to bring out the day’s seventh caution.
Allgaier, Busch and Cindric traded the lead until Lap 158 when first Allgaier, and then Cindric, came down pit road for green-flag stops and Busch did the same the next lap. Harrison Burton led the next 17 laps in the No. 20 Joe Gibbs Racing Toyota before making a green-flag stop of his own.
Briscoe and his No. 98 Stewart-Haas Racing Ford team decided to gamble and stay out to see if they could catch a caution at the right time. That right time didn’t happen, though, and on Lap 192 he had to make his way down pit road for a splash of fuel to get to the end.
That put Busch back on top and, despite the final caution on Lap 196 that put the race into overtime and a green-white-checkered flag finish, he held on for the apparent victory.
There were 15 lead changes among seven drivers and nine cautions for 39 laps.
Follow I Love Fort Worth on Facebook… please.
Newsletter Signup