After Curfew - In Memory of George Floyd

I Love Fort Worth: Photo Of The DAY

THE NEW NORMAL: An Artist’s Response to COVID-19 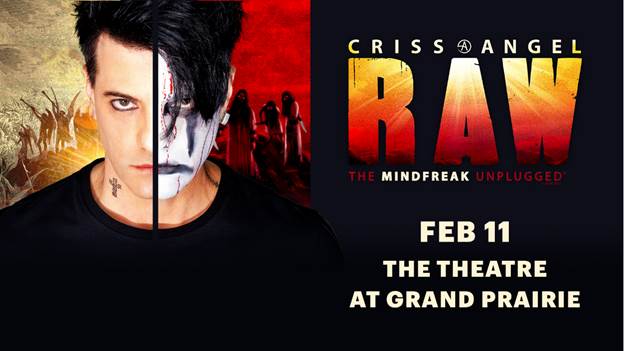 The Theatre at Grand Prairie

Tickets on sale Friday, November 1st at 10am

Grand Prairie – Criss Angel heads to the Dallas/Fort Worth area with his RAW The Mindfreak Unplugged show February 11th at The Theatre at Grand Prairie.  Tickets on sale this Friday, November 1st, 10am at AXS.com.

Criss Angel has dominated the world of magic for over a decade, but even with his incomparable success, Criss’ passion is to constantly create and bring his magic revolution to fans everywhere. Criss Angel RAW – The Mindfreak Unplugged is a theatrical experience unlike any seen before; bringing Angel’s famous sleight of hand street magic, mentalism, and even some of his most iconic illusions to life – all performed in an intimate, raw setting. This extraordinary evening of magic unplugged features Criss and some of his amazing friends with a stripped-down purity that’s in-your-face and guaranteed to blow your mind. Experience Criss Angel like never before!

Criss Angel is the most influential and imitated magician of the modern era.  From his role as star, creator, executive producer and director of the most successful magic television series of all time, Criss Angel MINDFREAK on A&E Network, to his #1 best-selling Las Vegas stage show Criss Angel MINDFREAK, to countless critically acclaimed television specials and series, best-selling books, top-grossing retail products, music CDs and more.  Hailing spectacular reviews from outlets such as Bloomberg Businessweek – who called him “the biggest name in Las Vegas magic”, and the Las Vegas Sun – “The #1 magic show of all time!”, Angel’s magic revolution has single-handedly brought upon the art’s resurgence.

If Scrooge Was A Brother