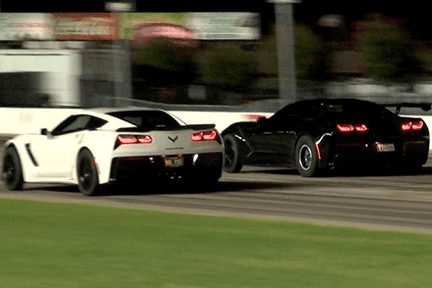 It all comes down to Week Six. Universal Technical Institute Friday Night Drags has hosted a season of standout performances across all classes, and this week it wraps up with its annual Fan Appreciation Night at Texas Motor Speedway.

In five weeks we’ve seen a four-time winner, an impressive quartet of three-time victors, and another four-pack of two-time winners. Due to their dominance, five divisions are holding coronation ceremonies this week with another simply needing its driver to pass technical inspection to take the title.
The US Army Super Car Class, though, is a neck-and-neck battle between a pair of friends. Bryan Pomeroy holds an 11-9 advantage over Wes Coleman with this week’s rounds of racing remaining. If Coleman and his 2013 Cadillac CTSV Wagon win Week Six against someone other than Pomeroy the crown is his. Otherwise, Pomeroy and his high-powered 2019 Corvette take top prize.
In the Summit Racing Equipment Sportsman Modified Division John Apple took a bite out of the competition to the tune of three wins in the first five weeks. If he simply checks in this week, the point he’ll earn from that clinches back-to-back titles for him and his 1966 Chevy Nova.
Otherwise, victory laps abound.
In the Summit Racing Equipment Outlaw Division, count four wins for Tyler Cavett and a dominant series title.
Joe Watson and his 1983 Chevy C10 nicknamed Prime have controlled the Texas Born Performance Black Smoke Warrior Division in back-to-back years. He won three times in five weeks.
John Kuethe and his 2009 Nissan GTR won in Week One in the Snap-on Tools All Wheel Drive Class, and he led the title chase since then. His three plaques powered him to the championship.
The Summit Racing Equipment Sportsman Division has belonged to Mike Phillips and his 2016 Chevy Camaro. He has a trio of W’s to his name and this week takes home top prize.
Finally, it took two wins and two second-place showings for Gerard Cuellar and his 2002 BMW M3 to lock up the FastSigns Bandit Class.
Round Six of the six-week journey starts with gates and grandstands opening at 6 p.m.
Competitors can practice from 6 p.m. – 8:15 p.m. while other car lovers bring their rides for the In-N-Out Show-N-Shine car show.
Competition kicks off at 9:15 p.m.
UTI Friday Night Drags competitors must be 18 or older to participate with the entry fee being $20 per week. All vehicles must pass pre-race inspection, and all drivers must wear an approved helmet. Helmets can be rented at Texas Motor Speedway for $10 per night.
Spectator tickets may be purchased at Gate 6 at $10 for adults and $5 for children under 12. Parking is free outside Gate 6 or $20 in the infield. Coolers are allowed in both the grandstands and the infield.
The Torchy’s Tacos located in the TMS infield will be open for each event from 6 p.m. – 11 p.m.
The 2019 Universal Technical Institute Friday Night Drags schedule is:
For more information, CLICK HERE.
Newsletter Signup

College Football this Saturday in Fort Worth