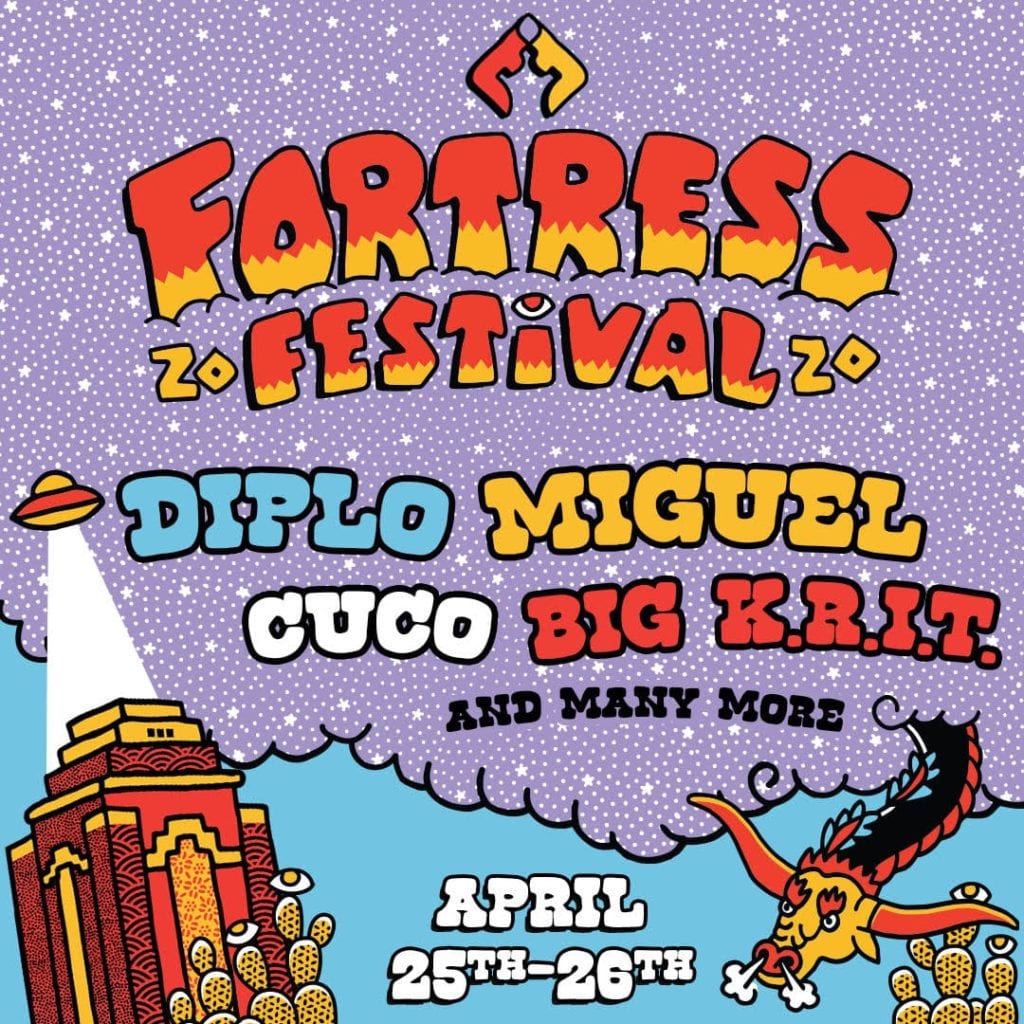 FORT WORTH, TX (JANUARY 16, 2020) – Fortress Festival is proud to unveil the full music lineup for the fourth annual music festival, which is set to return to Fort Worth’s iconic Cultural District on Saturday and Sunday, April 25-26 after a successful sold-out weekend event last spring. Weekend GA and VIP passes are available now for purchase at fortressfestival.com.

In partnership with the internationally acclaimed Modern Art Museum of Fort Worth, Fortress Festival will again offer music lovers from North Texas and across the country a boutique multi-genre festival experience celebrating acclaimed music acts and international art. This year’s festival will offer festival-goers its most diverse lineup yet, including several Hispanic artists of international fame in its tradition of offering a variety of today’s most sought-after music acts.

Grammy Award-winning DJ and record producer Diplo will help to headline this year’s event. In the past year alone, the perennial chart-topping producer released his own four-track EP, Higher Ground, as well as a special collaborative project with Labrinth and Sia, LSD, in addition to receiving the 2019 Grammy Award for “Best Electronic Dance Recording” for his work with Mark Ronson—all while he continues to prepare for the upcoming release of Major Lazer’s fifth and reportedly final album, along with a new solo album and highly anticipated follow-up project with Jack U-collaborator Skrillex.

Fortress Festival will also welcome a variety of acts with strong ties to Latin America, including 2020 headliners, like R&B singer/songwriter Miguel, who will perform in support of his latest projects, including his first-ever Spanish-language EP, Te Lo Dije, which was released last April, and War & Leisure, which was nominated for “Best Urban Contemporary Album” at the 2019 Grammy Awards; and singer-songwriter Cuco, who just released his critically-acclaimed debut album, Para Mi, this past July, further solidifying him as one of today’s top up-and-coming national performers.

Other notable worldly and Latin-influenced artists in this year’s lineup include Mexican-American rapper Snow Tha Product, who has strong ties to Fort Worth having lived in the city for several years; and Combo Chimbita, a quartet of first-generation, New York-based musicians with Colombian ties who just released their sophomore project, Ahomale, this past May, featuring their unique blend of psychedelic and futuristic sounds with funk and soul.

Similar to years past, the festival will also be playing host to a variety of acts from the greater Dallas/Fort Worth area to help showcase North Texas’ incredible and diverse musical talents. Notable D/FW performers include post-punk band Rosegarden Funeral Party; electro-pop duo Prizm; singer/song Tippy Balady; indie-pop singer Remy Reilly; high-energy jazz fusion group Kwinton Gray Project; and Son of Stan, a pop-rock project from Jordan Richardson, who won a Grammy Award for his previous work with Ben Harper’s Relentless7. Plus, there is a healthy mix of top local rappers set to perform, including Rakim Al-Jabbaar (Dallas), who just released his last album, Underground God, this past fall; Renizance (Ft. Worth), best known as the founder of the underground rap collective Immortal Soldierz; and the oft-labeled “godfather of Fort Worth hip-hop,” Smoothvega (Ft. Worth).

Similar to the past two years, the festival will take place in the highly renowned Cultural District of Fort Worth – home to some of the most lauded art museums in the country, including Modern Art Museum of Fort Worth and Kimbell Art Museum – and will be entirely housed within the spacious outdoor lawn adjacent to the historic Will Rogers Coliseum. The festival will again feature two outdoor main stages with non-overlapping sets to ensure fans are able to catch every minute of each performance.

New this year is the Platinum VIP ticket, which is available for $399 with this Early Bird pricing. Platinum includes all of the amenities of VIP, plus exclusive access to a riser next to the main stage for the most intimate view of the performances as well as an exclusive lounge area with food and drink offerings.

Continuing the tradition from past years, both GA and VIP festival passes offer FREE access to the Modern’s galleries during the festival, including exclusive late-night access. Additional details surrounding expanded programming and collaborative offerings from the Festival and Museum will be announced in the coming weeks.

Fortress Festival continues to be independently produced by Fortress Presents, a Fort Worth-based independent production and promotions company founded in 2016 by North Texas natives Alec Jhangiani and Ramtin Nikzad. Beyond the flagship festival, the Fortress Presents team includes a diverse portfolio of branded events along with event production and marketing services.

Fortress Festival would like to thank their 2020 partners who have helped make this fourth annual event possible, including presenting partner The Modern Art Museum of Fort Worth, as well as sponsors Crown Royal, Smirnoff, Trinity Metro, Mike’s Hard Lemonade, Higginbotham, Fort Worth Promotion and Development Fund, Visit Fort Worth, Tiki Biosciences, Omni Hotels & Resorts, and The Bomb Factory .

This will mark the fourth annual Fortress Festival, which cumulatively has played host to over 35,000 total attendees since its inaugural festival. Since inception, Fortress Festival has welcomed to its stages a variety of high-caliber music talent from Texas and around the globe, with previous acts including Leon Bridges, Father John Misty, Run The Jewels, CHVRCHES, Rae Sremmurd, Courtney Barnett, Purity Ring, Flying Lotus, De La Soul, RZA, Slowdive, The Voidz, Tinashe, Nathaniel Rateliff & the Night Sweats, Peter Hook & The Light, tUnE-yArDs, and many others.

Stay tuned as additional festival details will be announced in the coming months, including the daily lineup, single-day tickets, and the full performance schedule. For more information, please visit fortressfestival.com. Be sure to follow Fortress Fest on Facebook at www.Facebook.com/FortressFestivalTX, as well as on Instagram and Twitter at @FortressFest for updates and special promotions. The Festival’s official hashtag is #FortressFestival2020.

Founded in 2016, Fortress Festival has become the premier music festival in North Texas. The two-day festival takes place each April in Fort Worth’s Cultural District. The festival is a partnership between Fortress Presents and the Modern Art Museum of Fort Worth. For more information, please visit fortressfestival.com.

Chartered in 1892, the Modern Art Museum of Fort Worth is the oldest art museum in Texas and one of the oldest museums in the western United States. A new home for the museum, designed by the world-renowned architect Tadao Ando, opened in 2002 and features 53,000 square feet of gallery space, a 5,600-square-foot education center, and a state-of-the-art auditorium. The collection is comprised of nearly 3,000 objects, including paintings, sculptures, videos, photographs, and prints. The majority of works in the collection are dated between 1945 and the present. All major, international movements are represented, including Abstract Expressionism; British, German, French, and American Pop; Color Field Painting; Minimalism; Conceptualism; Post-Minimalism; New Image Painting, and Neo-Expressionism. For more information, please visit www.TheModern.org.

In this article:featured, Fortress Festival
Up Next: