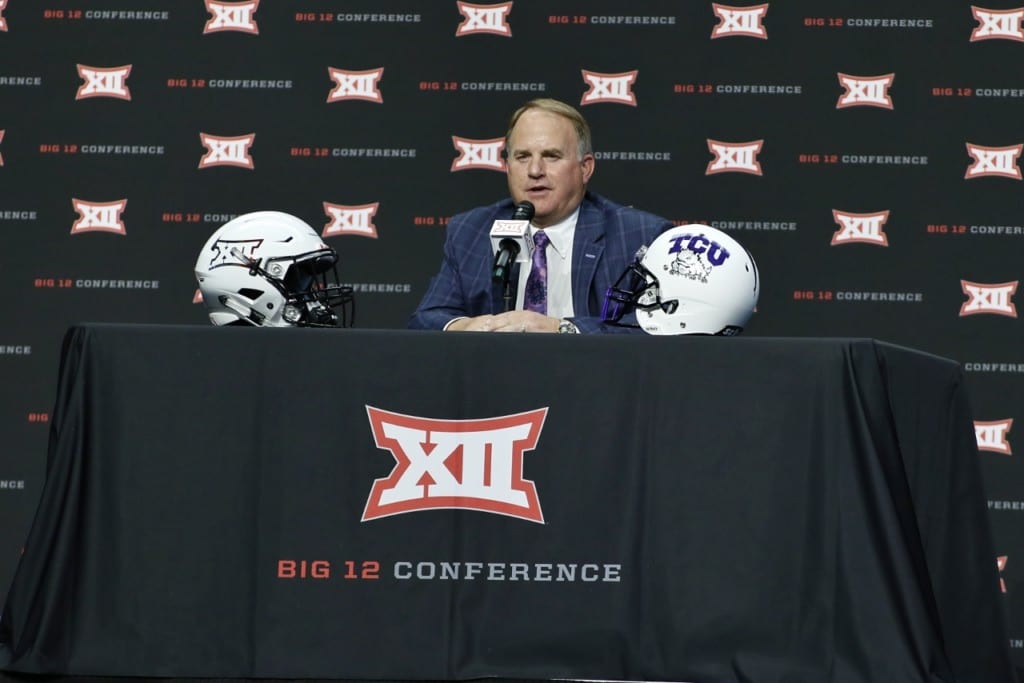 ARLINGTON– The 2019 Big XII Conference Football Media Days are taking place at AT&T Stadium and TCU head football coach Gary Patterson was among the coaches to meet the assembled press on day one of the festivities.
Below is a snippet from Coach Patterson’s Q&A session:

GARY PATTERSON: First of all, I want to thank Jerry [Jones], getting over to AT&T Stadium it was about 17 minutes over. I was able to have a staff meeting before I came over, so compared to other Media Days through the years where you had to leave for a couple of days has been awesome for us.

Obviously, for us as a group, we’re excited to get back, everything we went through at the end of the season, really excited about the group, great chemistry. We were young a year ago.

Watching them and how they’ve grown up. I think you will see that with the young guys I brought with me today.

I think when you go through what we had to do being 3-5 and being able to win four out of five at the end of the season, it wasn’t pretty. So held a lot of those guys out in the spring. I think we had 11, 12, 13 starters that didn’t go through spring, so I’m probably as excited about it as anybody as far as getting back into it. Doing it. Everybody likes to talk about quarterback.

The thing I liked best probably last year, you had a quarterback who hadn’t played a lot, was young, a transfer. We had and a fifth-year guy and then a guy that probably couldn’t play because of injury going through the season and that pretty much started everything off.

But we have six guys. I think the competition level, the level of maturity, how they prepared in the spring and then watching them lift, run, do everything in the summertime it’s unbelievable to have probably most of our offense back. Where you’ve got to grow up is defensively, and when we start on camp, come in the 1st, start on the 2nd, that will be our goal.

If it’s any indication what we’ve gone through this summer, they’ve done well enough we’ve actually pulled back on a lot of the running, some of the running and some of the things we’ve done just for the simple reason of staying a little healthier. I found usually that older teams don’t get banged up as much as young teams do, and we were young a year ago. So we’re going to find out if that holds true. TCU is ready to go. You gotta love the season, don’t you? It’s a lot of fun.

So for us, getting back into it, I think our kids are excite about it and really even our freshmen class has been unbelievable. The kind of people they are, how they’ve handled themselves at the university, off the field and on the field has been awesome.

Q: Coach, you mentioned the quarterbacks. How would you handicap it at this point? All six pretty even? I know going into fall camp you said you would like to get it down to two.

GARY PATTERSON: I would handicap it like my golf game. I wouldn’t handicap my golf game, to be honest start at the end of April and play into May and then we start camps.

Mike Collins wasn’t at catch because of mending, he’ll be back.

Alex Delton, you’ve got a guy that was a team captain, handled himself well.

Max Duggan, came in, the freshman.

Justin Rogers was able to do more this spring than last spring.

So for us having all those guys along with Baldwin and Downing so you have six guys that I think really have handled themselves very well. I always found when you have a high competition level as a general rule you end up with a better product and our competition level this year is going to be going into catch this summer, at a high level and the best part about it is they all get along.

So just like you I’m kind of excited to see how everybody does. I judge quarterbacks on Saturdays, but at some point in time, out of that group we will have to get down to three pretty quickly because you can’t give guys enough reps to get where you need to without doing that.

Q. Health-wise where are Justin [Rogers] and Michael [Collins] right now and do you expect them to be 100%?

GARY PATTERSON: Mike is full speed. He’s ready to go. Mike is full speed and Justin is somewhere about 90, in there, just getting started. But he was able to go through spring, take reps, do things. We just keep working with him. That injury is one of those, the guy that plays for the Cowboys the linebacker, one of these days that nerve just wakes up, and it’s not completely woke up, but it’s a lot farther along than it was a year ago.

Q. With all the turnover the Big 12 has had with coaches recently, do you think the league is coming back toward you as a defensive guy or do you still think it’s going to be an offensive power house of a league?

GARY PATTERSON: I think the league has been changing a little bit anyway.

I think you’re starting to see people get bigger, a lot more tight ends, probably Kansas State does that.

I hear rumors that Les [Miles] is getting back to tight ends, fullbacks, stuff he did, but we prepare for all that stuff anyway.

You gotta take ’em one game at a time.

In preseason during our fall camp we try to prepare for everything that we don’t see from our own offense. I think that’s went been one of our secrets to doing things. With a younger group we’re going to have to be able to grow up at that point, but I think it makes it exciting.

When you play in a round robin it’s harder, after three years of playing the same person you’re not fooling anybody and you’re not going to get a break, you’re not going to go well I’m not going to have to play them for two years, and here is the thing, over the years you catalog how everybody plays each other, so I start looking at certain ball games because certain people play other people better than what other people do because you see ’em year after year after year. So when you have a new person coming in, you don’t have to invent something new gameplan-wise because you haven’t played them yet, so this in some ways makes it easier, but in all the teams that have somebody coming in new, Kansas kept Coach Bowen.

Matt Wells was on the team when I coached at Utah State, they have a couple guys, if you look at each of the teams that has somebody new — Coach Brown was at Texas Tech and we played against him when I started in the league back in 2012. So I don’t think it’s new.

Vic Koenig and I played together at Kansas State, and he I have talked over the years. You only have 130 teams so as far as watching people, you know, sometimes people tweak, but it will give us — we watched all you can watch to see what’s going to go on and how people do things. Trying to do the best we can to make sure we’re prepared.

Q. Coach, I saw your tweet this morning about your facilities, and it sparked this question: In terms of the pride factor that you have in what and you your regime for last of a better word has been able to build at TCU while you’ve been there?

GARY PATTERSON: We have been able to play at a high level on the field, you know, everybody is saying in recruiting we’re not a big-time program, then they should look at how many guys having into the NFL and how we’ve played and how we’ve done things.

If you want something to do, what you need to do after this Media Day is over you need to walk into our stadium and see how the east side and the new video board how it changed the presence of our stadium. I think it was exactly what we needed as far as recruiting-wise and fan experience-wise and I tell you to be honest it’s going to keep the noise in but it’s an impressive stadium for seating 50,000 and it will be just as loud.

It was already a loud stadium, but it’s going to get louder and I think our fans are going to love it.

In this day and age because of the foundation because of the monetary part of it, to be able to understand the structure and the foundation of what that gives us on a year-to-year basis, it was a well thought out process, it wasn’t we wanted to do something because we wanted to do it, I think you have to be able to show kids in this day and age what you want to do and as I keep telling people, eyes up, you gotta keep climbing, how did you want to do that and that’s exactly the statement and what it’s going to say when we’re done with it.

I’ve been excited with the vision of the people that put it together. We got new grass in because I didn’t think we could play as fast, we’re playing on the road faster on turf so we put in the grass we had on our practice field and that’s another benefit because you’re going to practice on what you’re going to practice on. It’s very quick and I think it plays to our hand and how we do things. We’ve always believed that you tweak things even if you have great years.

These things were going on, we knew we needed to do this before you had a 7-6 season. So for us, I applaud the Board of Trustees, our chancellor, our AD who is here today and all the people that gave. What I like best about it, I think one of the mistakes that head coaches make sometimes and especially if you’ve been at a place as long as I have, you get X amount of friends and you grow old with them and you forget everybody else and we’ve worked hard, a lot that east side was given with funds of younger money, younger generation of TCU Horned Frogs and I think that bodes well for TCU and that’s a blessing that we have the next generation growing up that still want to be successful because he want to become what everybody quotes a blue blood, which is what our goal is to be thought of on a day-to-day basis and we don’t get shut out because they don’t think we’re good enough from a program or university standpoint, I think if you look at the stadium I think you would say that there is not much else they could do.

If you walk around the university and see the university is trying to win a national championship I think you would see the standpoint from the whole situation that we’re trying to get to where we need to get to so we represent the Big 12, the city of Fort Worth, the Metroplex and TCU at their highest level.

In this article:big 12, featured, tcu
Up Next:

Joshua Franco VS Oscar Negrete at The Theatre at Grand Prairie