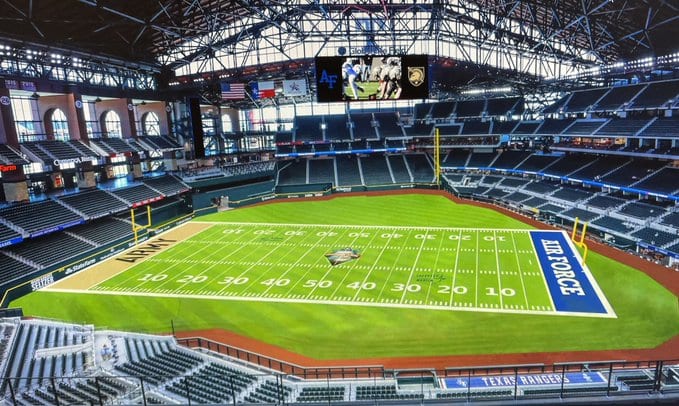 Arlington, TX – The first college football game at Globe Life Field will feature a traditional rivalry of United States Service Academies. Details of the Lockheed Martin Commanders’ Classic between the U.S. Air Force Academy and the U.S. Military Academy were announced this morning.

The two-year agreement begins on November 6, 2021 with Air Force as the home team.

Army will be the home squad for the return meeting on November 5, 2022.

Game times and broadcast information will be announced at a later date.

The Texas Rangers will host and operate the games with marketing assistance from Dallas-based LST Marketing. The 2021 matchup of FBS rivals will be the first college football game hosted at Globe Life Field.

Tickets for the 2021 Lockheed Martin Commanders’ Classic will go on sale Dec. 17, 2020 at 1:00 p.m. CT at texasrangers.com/commandersclassic.

“We are honored to have Air Force and Army play the inaugural football game at Globe Life Field,” said Texas Rangers Executive Vice President of Sports & Entertainment Sean Decker. “Honoring our military heroes is very important to the Texas Rangers, and we expect the environment and other activities surrounding this great matchup will make for a very exciting weekend in Arlington.

“I want to thank Lockheed Martin for its title sponsorship of the Commanders’ Classic. Lockheed Martin embodies our nation’s commitment to our Armed Forces, and it is the ideal relationship for this storied matchup. I also want to recognize the efforts of our partner LST Marketing for its assistance in making this event a reality.”

Globe Life Field opened this past spring and is the home of Major League Baseball’s Texas Rangers, which played 30 games in the park without fans in the abbreviated 2020 season.

The facility then hosted 16 MLB neutral site postseason games in the National League Division (3) and Championship (7) Series and the World Series (6).

Games in the final two playoff rounds were played in front of approximately 11,500 fans per game, the maximum capacity allowed by MLB.

Designed with a retractable roof to be a premier multipurpose sports and entertainment venue, Globe Life Field was the home of more than 60 high school graduations in May and June and most recently hosted the 10-night Wrangler National Finals Rodeo from December 3-12 with sellout crowds of 14,500 per performance.

The Globe Life Field seating capacity for the Lockheed Martin Commanders’ Classic is expected to approximate the 40,518 figure for baseball.

The 1.8 million square foot facility includes sports lighting as well as broadcast locations that are specific to football.

A large contingent of Air Force and Army cadets and two Academies’ are expected to attend the games at Globe Life Field.

The Rangers will also be working with Air Force and Army to create ancillary events in the Arlington Entertainment District and Dallas-Fort Worth Metroplex around the Lockheed Martin Commanders’ Classic.

“Not only does The American Dream City have a rich tradition of hosting some of the nation’s biggest sports and entertainment events, we’re also a deeply patriotic community. I can’t think of a better inaugural matchup to commemorate Arlington’s incredible love and appreciation for our military than Army and Air Force and I can’t wait for another opportunity to showcase Globe Life Field’s versatility as one of the best new venues in the country.”

“Lockheed Martin is extremely honored to assume the role of title sponsor for the inaugural Commanders’ Classic in Arlington, TX. This sponsorship allows us to demonstrate our company’s support for our nation’s armed service members who bravely serve every day.”

“I am excited for our cadet-athletes and coaches to experience the new state-of-the-art venue at Globe Life Field. The opportunity to bring our service academy game to Texas is important for continuing to raise the profile and reach of Air Force Football. Texas is an important recruiting region for our program, and Academy, we also have a large number of active alumni and Airmen in the state. Thank you to the Texas Rangers, LST Marketing, and Lockheed Martin for the opportunity.”

“We are excited to announce the Commanders’ Classic series for 2021 & 2022. It is thrilling to have this opportunity to play one of our rival academies in the state of Texas, home to many military installations and service men and women. I’d like to thank Sean Decker and the entire Texas Rangers organization for providing this wonderful opportunity for our cadet-athletes and fans, and to Lockheed Martin for its tremendous support of the event.”

“It is an honor to work with the U.S. Air Force Academy, the U.S. Military Academy at West Point and the Texas Rangers in producing the Lockheed Martin Army vs. Air Force Commanders’ Classic. We intend to lift the profile of this game and the Commander-in-Chief’s Trophy competition by celebrating the game’s history and by creating new traditions.”

“The football rivalry between our nation’s service academies is among the greatest in all collegiate athletics. During my time at the Air Force Academy, it was always at the top of our goals as a team to beat Army and Navy. I am very excited to see this rivalry and competition between our nation’s future leaders of warriors come to North Texas at Globe Life Field in 2021.”

In this article:collegge football, globe life field
Up Next:

Post game quotes from Mav’s win over the T Wolves