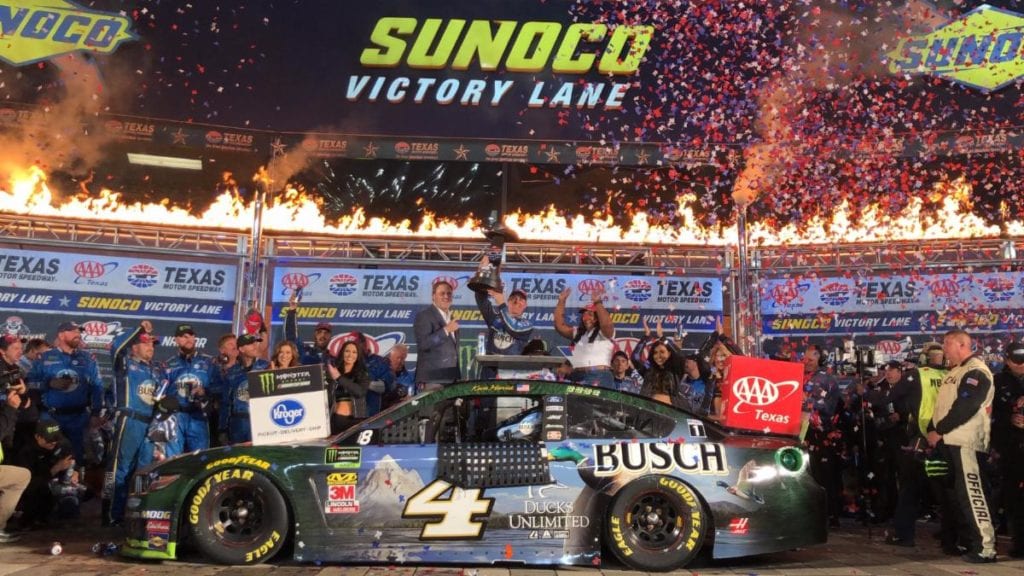 Kevin Harvick wins the AAA Texas 500 at Texas Motor Speedway in Fort Worth. (Photo/Texas Motor Speedway)
FORT WORTH, Texas – Kevin Harvick looked good early, fought back from a pit road penalty midway through and dominated the final stage, leading 73 of the final 80 laps, to capture his third consecutive AAA Texas 500 at Texas Motor Speedway.
The victory secured Harvick and the No. 4 Stewart-Haas Racing (SHR) Ford team a spot in the Championship 4 of the 2019 Monster Energy NASCAR Cup Series Playoffs for the fifth time in the past six years.
Harvick moved past SHR teammate Aric Almirola’s No. 10 Ford on Lap 255 of the 334-lap race and, after a final green-flag pit stop, drove away to a 1.594-second win and trip to Sunoco Victory Lane. Daniel Suarez’s third-place finish in the No. 41 Ford led to a 1-2-3 SHR Texas sweep.
The balance of the top-10 finishers were Joey Logano (No. 22 Team Penske Ford), Alex Bowman (No. 88 Hendrick Motorsports Chevrolet), Martin Truex Jr. (No. 19 Joe Gibbs Racing Toyota), Kyle Busch (No. 18 JGR Toyota), Ryan Blaney (No. 12 Team Penske Ford), Kurt Busch (No. 1 Chip Ganassi Racing Chevrolet) and Erik Jones (No. 20 JGR Toyota).
The victory was Harvick’s 49th in the Monster Energy NASCAR Cup Series, tying SHR team owner Tony Stewart for 14th all-time. NASCAR Hall of Fame inductees Junior Johnson and Ned Jarrett are tied for 12th with 50. Harvick becomes the second driver to lock a spot in the Championship 4 after Truex.
“Our car was just so fast through 3 and 4, as long as I could keep my momentum up, I could get up beside him,” said Harvick of his side-by-side battles with Almirola. “So it was definitely fast, and speed made up for our Ducks Unlimited Busch Beer Ford Mustang tonight what we lacked a little bit in handling.”
“They’ve already built the car, picked a direction,” continued Harvick about preparation for the championship race. “Like we talked about earlier, we’ve got so many things that — so many things that you had to choose from an aero standpoint, and Homestead is such a unique racetrack.  We’ve already been to the simulator, we’ve already built the car, and now we’ve just got to make sure that we do what we think is right and go with our gut and see what happens.”
Harvick started from the pole after Saturday’s qualifying lap of 28.465 seconds at 189.707 mph on the 1.5-mile asphalt oval. He led three times for 43 laps in Stage 1 which was very busy due to six caution flags, the most in a single stage all season, continually shuffling the field. Harvick’s SHR teammate Clint Bowyer led the majority of the first 85 laps, but also shared the top spot Erik Jones.
Four of the six Stage 1 cautions were for crashes by playoff contenders Chase Elliott and Denny Hamlin, as well as Brad Keselowski and Ricky Stenhouse Jr. The top 10 at the end of the stage were Harvick, Bowyer, Kyle Larson, Alex Bowman, Kyle Busch, Austin Dillon, Kurt Busch, Ryan Preece, Ryan Blaney, and Daniel Hemric. Six lead changes among three drivers.
Jimmie Johnson, who holds a record seven victories at Texas Motor Speedway, was a contender early, leading 40 laps (99-138) before spinning in Turn 2 on Lap 187 and finishing 34th. Despite the end result, the seven-time series champ must have felt at home at Texas this year, having also earned the pole and leading 60 laps during March’s O’Reilly Auto Parts 500.
Almirola won Stage 2 with Jones, Johnson, Larson, Logano, Harvick, Bowman, Suarez, Kyle Busch and William Byron rounding out the top-10. There were no cautions in Stage 2 after the tumultuous first stage.
The AAA Texas 500 saw 26 lead changes among 11 drivers and 11 cautions for 56 laps.
Harvick celebrated in victory lane with the Texas Motor Speedway traditional hand-crafted Justin Cowboy hat and the pair of Smith & Wesson 629 Deluxe six-shooters, the finest handguns possible with designs harkening back to the most famous and collectible guns that Smith & Wesson ever constructed. His pole-winning run earned Harvick a brand new Henry Texas Tribute Edition shown to the public for the first time and featuring a black American walnut stock with gold inlaid stars and map of the state of Texas
For 2020 season ticket or race information, please visit texasmotorspeedway.com or call the speedway ticket office at 817.215.8500. With an adult ticket purchase, accompanying tickets for children 12-and-under are $10 for the AAA Texas 500 and free for the O’Reilly Auto Parts 300 playoff race.
Newsletter Signup