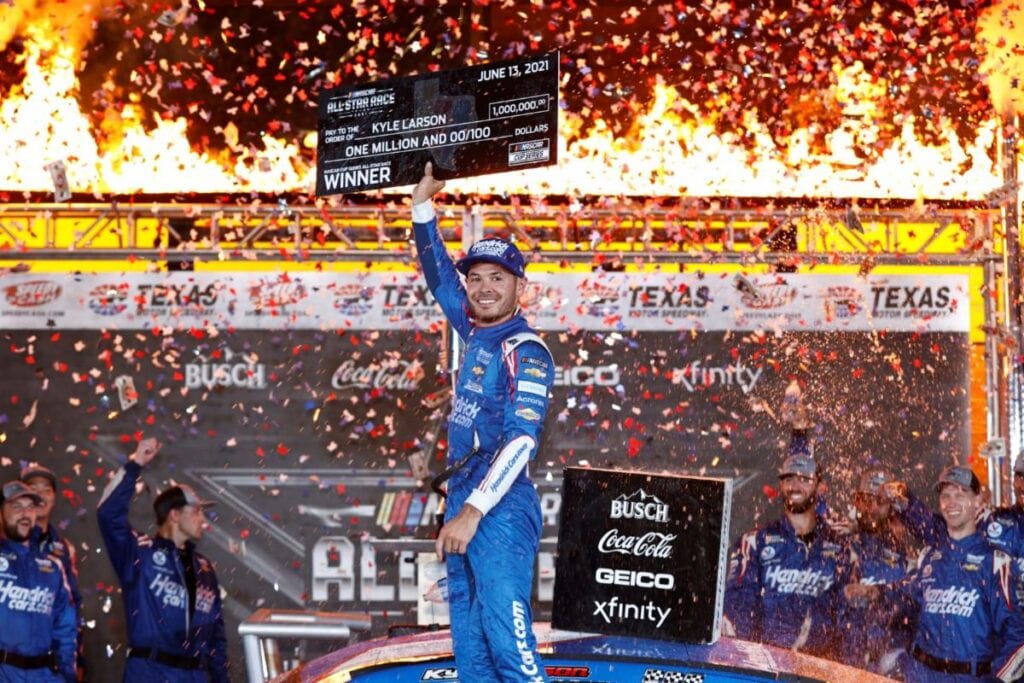 KYLE LARSON CONTINUES HOT STREAK WITH NASCAR ALL-STAR WIN (Photo/Texas Motor Speedway)
Kyle Larson earned a $1 million paycheck and his second NASCAR All-Star Race victory in three seasons – putting on a racing master class Sunday evening at Texas Motor Speedway.
Larson was part of a frenetic three-wide move for the race lead with eight laps remaining – himself and runner-up Brad Keselowski splitting the car driven by Larson’s Hendrick Motorsports teammate Chase Elliott to make the move forward.
Larson pulled his No. 5 Hendrick Motorsports Chevrolet in front of the field and while Keselowski was able to get to his bumper a couple times thereafter, the Penske driver was unable to make a pass in the closing laps of the race.
It was a thrilling finish to a new six-segment 100-lap race format – with no NASCAR Cup Series championship points on the line, but plenty of bragging rights to claim. Larson’s other All-Star Race win came in 2019 at Charlotte Motor Speedway. He is one of only eight drivers in NASCAR history to win multiple All-Star races.
This is Larson’s third consecutive victory on the schedule – counting wins at the previous two regular season races – at Charlotte and Sonoma. He has three points-paying wins and sits second in the NASCAR Cup Series championship.
“It was wild,” a smiling Larson said from Texas’s SpeedyCash.com Victory Lane where he celebrated wearing the traditional Texas Motor Speedway cowboy hat and firing a pair of Smith & Wesson 629 Deluxe six-shooters while accepting the 100-pound NASCAR All-Star Race trophy produced by Jostens. “This format set up for an exciting finish and there was a lot of grip on this race track for us to be passing. It was a helluva race from my seat.”
Fans in the packed grandstands apparently agreed – standing on their feet for much of the night and definitely during the final frenetic laps.
“That last restart worked out exactly how I needed it to,” Larson elaborated later. “I wanted Chase [Elliott] to not get a good run down the back. Thankfully, I think the 12 [Blaney] got to his inside and I just shoved him down the back and he probably thought I was going to just follow him and I was like, ‘there’s got to be enough grip where we’d be running for one corner.’
“It was a little slick up there, but I was able to get it and then hold him off from there,” the 28-year old Californian continued with a smile. “I can’t believe it.”
Larson ultimately held off Keselowski by a scant .206-seconds. Elliott was third, followed by Penske teammates Joey Logano and Ryan Blaney. Hendrick Motorsports’ other two cars – driven by Alex Bowman and William Byron finished sixth and seventh, respectively. Byron’s 30 laps out front were most on the night.
Aric Almirola, Kyle Busch and his older brother Kurt Busch rounded out the Top-10 in the 21-car field.
The new All-Star race format included random inverts in three of the early stages and a pit stop contest during the race that earned a $100,000 prize for Elliott’s No. 9 Hendrick Motorsports team.
The final 10-lap run however, was every bit the wild and competitive flair expected for the sport’s annual All-Star feature. Blaney, who restarted from the second row in that segment made a daring move toward the lead at the at the final green flag dueling with Elliott and Larson.
And Keselowski briefly took the lead while he and Larson negotiated their three-wide move around Elliott, only to have Larson claim the lead right back. He led 17 of the 100 laps on the evening, most importantly the final seven.
“It feels like just to run second to the Hendrick cars right now is kind of an accomplishment,” Keselowski said. “They’re just stupid fast and I had him off Turn 4 but they just have so much speed. He just motored right on back by me.’
Ross Chastain, Tyler Reddick and Almirola advanced to the featured All-Star Race by way of The Open – a 50-lap qualifier held earlier in the evening. Chastain and Reddick won stages and Almirola winning the last stage for the victory. Wood Brothers Racing driver Matt DiBenedetto advanced to The All-Star race by virtue of fan vote and finished 17th.
Tickets for Texas Motor Speedway’s 2021 major event season, including the October 16-17 Autotrader EchoPark Automotive 500, are on sale now at texasmotorspeedway.com.
Newsletter Signup