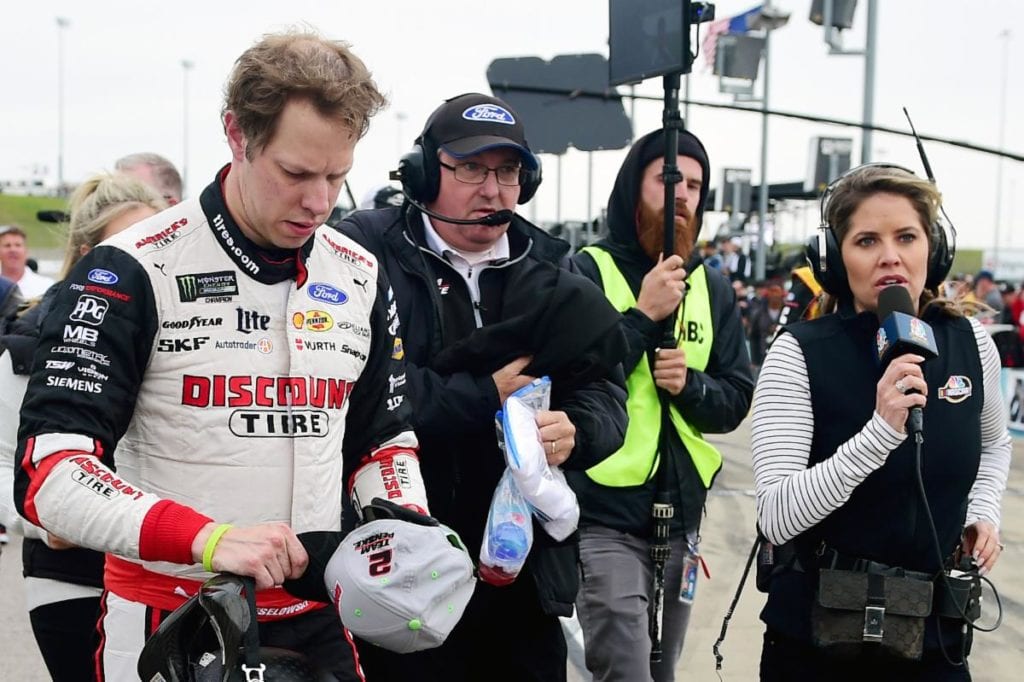 No. 2 Team Penske driver Brad Keselowski is followed by reporters after failing to advance to the Monster Energy NASCAR Cup Series Round of 8. (Getty Images/Courtesy of Texas Motor Speedway)
FORT WORTH, Texas – Denny Hamlin was the big winner at Kansas Speedway Sunday, wrapping up the third five-win season of his career and putting an exclamation point on his clinching drive into the Monster Energy NASCAR Cup Series Round of 8. Despite all that, the real excitement played out behind the No. 11 Toyota in the final laps Sunday.
Entering the race 10th in the standings and 18 points below the cutline, No. 9 Hendrick Motorsports Chevrolet driver Chase Elliott thought he’d have to win in order to advance.
“Honestly, I was just trying to win the race and the rest of it just kind of fell into our hands a little bit,” Elliott said after the race. “Luckily, we got a good bit of stage points in that first one, got five more in the second stage, and battled for the win.”
Elliott finished second and still thought he hadn’t done enough, but No. 2 Team Penske Ford driver Brad Keselowski was shuffled back on the final restart, losing six positions on the track and dropping below the cutline, giving Elliott the ticket to the Round of 8.
“Just couldn’t get it to go on the restart,” Keselowski lamented. “Inside lane restart. Didn’t capitalize on it. Needed to get up and I couldn’t get up and I got sandwiched. Somebody went three-wide and got me to the middle. Just all bad. I didn’t do a good enough job.”
Keselowski, No. 24 Hendrick Motorsports Chevy driver William Byron, No. 88 Hendrick Motorsports Chevy driver Alex Bowman, and No. 14 Stewart-Haas Racing Ford driver Clint Bowyer saw their championship dreams end, but for the elite eight remaining, a championship could still be in store.
Below are the Monster Energy NASCAR Cup Series Playoff standings as the series moves to Martinsville Speedway to start the Round of 8. Listed with each driver is a fact about his playoff experience at Texas Motor Speedway, coming up November 3.
1. Kyle Busch – 4,046 points (+18)
He has led laps in seven of his nine Texas Motor Speedway starts as a playoff driver, but he has yet to win the AAA Texas 500. He has won in the spring three times.
2. Martin Truex, Jr. – 4,042 points (+14)
When he finished second in the 2017 AAA Texas 500, Truex had the fastest lap 63 times, the highest in-race total of any driver that day.
3. Denny Hamlin – 4,037 points (+9)
Hamlin has been feast or famine in Texas playoff races. In 10 starts he’s finished in the top 10 six times, but 20th or worse three times.
4. Joey Logano – 4,030 points (+2)
His 233 playoff laps led at TMS is tops among this year’s Round of 8 drivers. He sits four laps clear of Kevin Harvick.
5. Kevin Harvick – 4,028 points (-2)
His 12 Texas starts as a playoff driver are the most all-time, and he’s finished in the top 10 in 11-of-12.
6. Chase Elliott – 4,024 points (-6)
In his Texas playoff debut in the 2017 AAA Texas 500, Elliott was the only driver to make more than 100 green flag passes.
7. Kyle Larson – 4,011 points (-19)
Despite making the playoffs in 2016, 2017, and 2018, this is Larson’s first start at Texas as a current playoff driver.
8. Ryan Blaney – 4,009 points (-21)
In his lone playoff start at Texas in 2017, he never left the top 15 at any point, finishing sixth.
The NASCAR Playoffs are currently staggered across all three of the national series in 2019.
The NASCAR Xfinity Series takes this week off before continuing the Round of 8 at Texas Motor Speedway for the O’Reilly Auto Parts 300 on November 2. No drivers are currently locked into the Championship 4 in Homestead, but Christopher Bell (+49), Cole Custer (+38), and Tyler Reddick (+37) are all near locks to make it there. Justin Allgaier holds the fourth and final spot right now with Chase Briscoe (-2), Michael Annett (-12), Noah Gragson (-17), and Austin Cindric (-30) giving chase.
The Gander Outdoors Truck Series is back in action this weekend at Martinsville for the middle race of its Round of 6. 2018 champion Brett Moffitt (+45) is comfortably above the cutline, followed by Stewart Friesen (+22), Austin Hill (+12), and Matt Crafton (+1). Tyler Ankrum (-1) and Ross Chastain (-2) are fighting to stay in the chase.
Texas Motor Speedway hosts playoff races for both the Monster Energy NASCAR Cup Series and Xfinity Series this year. The Xfinity Series O’Reilly Auto Parts 300 is Saturday, Nov. 2, and the Cup Series AAA Texas 500 is Sunday, Nov. 3.
For ticket or race information, please visit texasmotorspeedway.com or call the speedway ticket office at 817.215.8500. With an adult ticket purchase, accompanying tickets for children 12-and-under are $10 for the AAA Texas 500 and free for the O’Reilly Auto Parts 300 playoff races.
Newsletter Signup