Pat Green to Perform Live at The Rustic For Friendsgiving
Advertisement 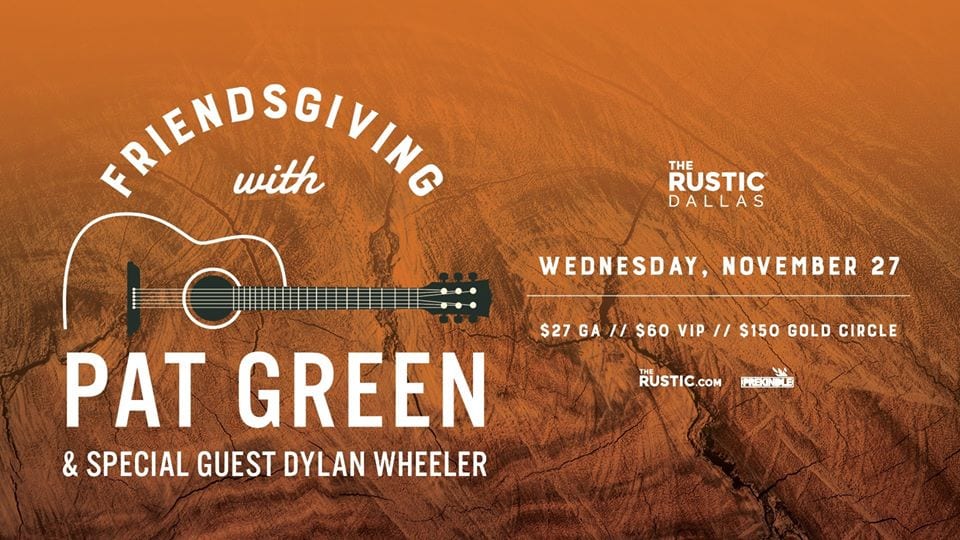 Pat Green to Perform Live at The Rustic For Friendsgiving

Country music star Pat Green will bring people together this holiday season when he returns to the restaurant and live music venue he calls home, The Rustic, for Friendsgiving.

On Wednesday, Nov. 27, The Rustic invites Dallasites to join them at Friendsgiving with Pat Green and Friends as the three-time Grammy nominee will take the stage and put on a dominant performance at the venue he helped put on the map.

Pat Green has finally come full circle – and all the way back Home. After rising through Texas’ dancehall scene years ago, Green earned himself major label support in Nashville and became the poster child of Texas music for a whole generation of fans. Named “the Springsteen of the Southwest” in People magazine, Green’s explosive live shows have made him a fan favorite and a hot ticket, selling out venues from the Houston Astrodome to the Nokia Theater in Times Square.

The San Antonio native has sold over two million albums and has been nominated for three Grammy Awards.

But after releasing six albums in eight years, sending singles like “Wave on Wave” and “Let Me” up the charts and touring with powerhouses like Willie Nelson, Kenny Chesney and Keith Urban, the meat grinder of mainstream stardom proved to be too much. He was spent.

Now, after breaking the cycle for a three-year recharge, Green is back in his comfort zone and playing by his own rules again. His new independent album Home is his first set of originals in several years, and directly speaks to the hardcore fans that have been with him since the beginning.

Featuring a mature country sound that is both modern and exposes his roots for all to see, his new tunes are full of ringing acoustic guitars, slippery steel and dobro, wailing fiddles and heartfelt, personal lyrics, making Home the return to form many fans have been waiting for.

“I think I’m having the best year of my life,” Green said. “I feel happy and I feel smarter now. I look back and I wish I could go back in time and tell myself to slow down a little bit, but the truth is life is just enjoying the passing of time, as James Taylor says. There’s a lot of drama and there’s mistakes, and you’ve gotta get through all of it to get to what you’re looking for.”

The Rustic will open its doors for the concert to VIP ticketholders at 5 p.m. and general admission at 6 p.m., then an opener will take the stage at 8 p.m.

General Admission tickets for Green’s live show at The Rustic are available for just $27 at TheRustic.com.

VIP tickets, which include a separate VIP entrance, access to the private VIP section with optimal views of the stage and a private cash bar, are available for $60.

Meet & Greet tickets are available for $150 and include all of the VIP benefits plus a pre-party in the party patio in the front yard starting at 5 p.m., access to the VIP side stage lounge, passed appetizers in the lounge prior to the show start time, one signed poster and a meet and greet* with Pat Green. *In-house photographer will take meet & greet photos only. No cell phone photography allowed. Photos will be taken in groups the tickets were purchased in. Meet & Greet photos will be posted to The Rustic’s Facebook after the show.

With its casual atmosphere, live musical acts and unique, full-service dining experience featuring farm-fresh, homestyle dishes and a Texas-sized selection of wines, spirits and 40 beers on tap, The Rustic has carved a distinctive niche among Dallas, San Antonio and Houston restaurants. The concept is the brainchild of Noonan, Josh Sepkowitz and Texas country artist Pat Green, whose love of the outdoors and live music helped bring The Rustic to life. The result is a fun and relaxing dining and concert experience from a phenomenal patio, all under the big Texas sky.

The Rustic is located at 3656 Howell Street in Dallas.

In this article:featured, Pat Green, the rustic
Up Next: