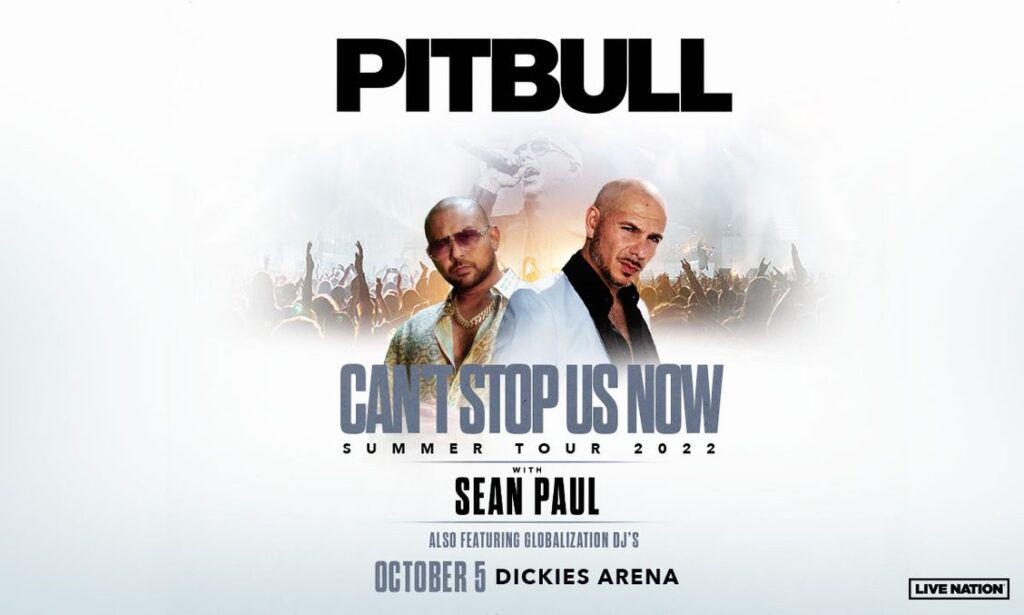 Pitbull at Dickies Arena in Fort Worth

Tickets go on sale Friday, April 15th at 12:00 p.m.. to the general public. For more information and to purchase tickets, please visit DickiesArena.com.

Pitbull invites disruption on a global scale as a GRAMMY®-winning independent international superstar, education advocate, business entrepreneur and motivational speaker. With countless awards, dozens of international number ones, hundreds of gold and platinum certifications, millions of single sales, 25 million album sales, and cumulative video views in excess of 15 billion, one of the most impressive careers in music history set the stage for him to make true change.

Not only did he successfully help establish Sports Leadership Arts and Management (SLAM!) tuition-free public charter schools across the country, he was honored by the United Nations General Assembly on behalf of Clean Water Here; he is a partner in eMerge Americas, the annual tech and innovation summit held in Miami; and he was honored alongside music legends as well as Nobel Peace Prize and Pulitzer Prize winners at the 2019 International Achievement Summit.

Pitbull and Horizon Media have partnered to launch 305 Worldwide, a new multicultural marketing agency. After announcing several partnerships in 2020 such as Espanita Tequila, LivexLive, and “From Negative to Positive” Podcast, Pitbull ended 2020 with a bang by ringing in the new year performing on the main stage in Times Square.

In the first month of 2021, Pitbull became the co-owner of NASCAR racing team [Team Trackhouse], and proudly served as the Grand Marshal of the 2021 NASCAR Daytona 500. At the same time, he only continues to expand his influence across fitness, health, and wellness. He launched 305-Life as the first daily supplement line to philosophically reflect the vibrant spirit of Miami through its high quality product.

As an investor and brand ambassador, he joined forces with Echelon for the “Pitbull X Echelon” partnership, providing Pitbull-themed rides to millions of users exclusively in the Echelon Fit App. He also teamed up with Columbia Care to introduce his own CBD line, N2P—an acronym for one of his most famous mantras “negative to positive.” He returned to the road in 2021 with the sold out I Feel Good Tour, packing arenas and amphitheaters coast-to-coast. Speaking of, Pitbull has performed for millions worldwide and even joined forces with the #1 life and business strategist, Tony Robbins, for numerous engagements around the globe. He maximizes his own creative, entrepreneurial and personal freedom, yet again, on his next long-awaited English album, coming soon.

It’s rare for an artist to become the personification of their genre. For just a word or phrase from their mouth to conjure the entire artform. Sean Paul is one of those artists.

Let him say “shake dat ting” in his commanding voice, and you’ll hear the embodiment of dancehall. Across seven studio albums and counting, Sean Paul has taken the genre global, from its origin in clubs in Kingston, Jamaica to the top of the charts, packing some of the biggest venues in more than 120 countries. Only Sean has the distinction of being the first Jamaican to play shows in Kazakhstan and Madagascar.

The Grammy Award-winning, international superstar has ignited stages in over 120 other countries, performing for huge audiences in some of the biggest venues around the world. Sean Paul has earned several Grammy and Billboard Music Award nominations and is the recipient of an American Music Award, MOBO Awards, Soul Train Awards, MTV Music Awards, ASCAP Rhythm and Soul Music Awards, a Source Award and a BET Award.

He is the only Jamaican artist to have won an American Music Award (2006) for Favorite Pop/Rock Male artist.

In this article:concerts, Dickies Arena, featured, pitbull
Up Next:

The Judds to Perform at Dickies Arena