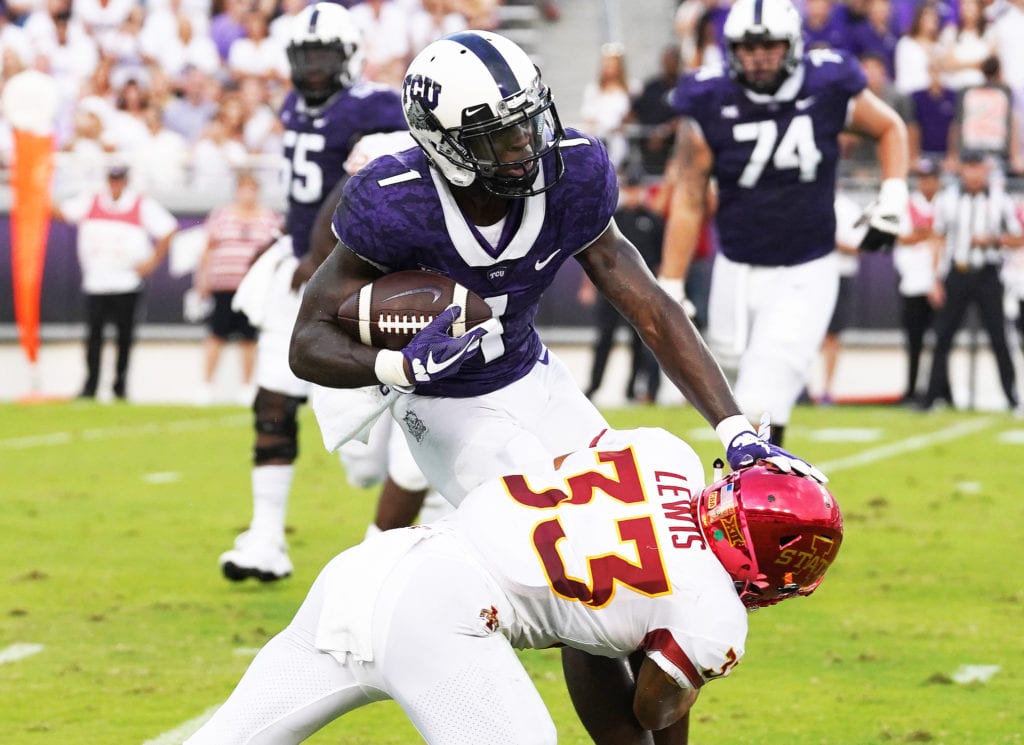 TCU wide receiver Jalen Reagor has been selected to the watch list for the Paul Hornung Award presented by Texas Roadhouse.

The Paul Hornung Award recognizes the most versatile player in major college football. TCU’s Jeremy Kerley was a finalist in 2010.

Reagor, on the Preseason All-Big 12 team, has also been selected to watch lists for the Maxwell Award and Biletnikoff Award. He has been tabbed the state’s best receiver by Dave Campbell’s Texas Football.

Reagor’s team-best 72 receptions and 1,061 yards receiving in 2018 both rank second for a season in TCU history. Forty-four of his 72 catches (61.1 percent) went for a first down or touchdown. The second-team All-Big 12 selection led TCU and the Big 12 in percentage of his team’s receptions at 30.1 (72-of-239), the highest mark by a Horned Frog in the 18-season tenure of head coach Gary Patterson.Reagor’s team-best nine touchdown catches tied for the fifth-best season total by a Horned Frog. He set a TCU record with seven consecutive games with a scoring grab.

Reagor became the first wide receiver in TCU and Big 12 history to top 100 yards rushing (121) and 90 receiving (91) in the 31-24 victory over Oklahoma State. He was the sixth FBS player since 1996 to accomplish the feat and the first Power Five wide receiver since Dexter McCluster for Ole Miss in 2009.

The junior from Waxahachie, Texas, also averaged 30.3 yards on kickoff returns and 12.1 on punt returns.

In voting by his teammates, Reagor was selected as TCU’s 2018 Dan Rogers Most Valuable Player. He became the first wide receiver to receive the award since Cory Rodgers in 2004.

In this article:big 12, Fort Worth Sports, Jalen Reagor, tcu, TCU Football
Up Next: