The Judds to Perform at Dickies Arena
Advertisement 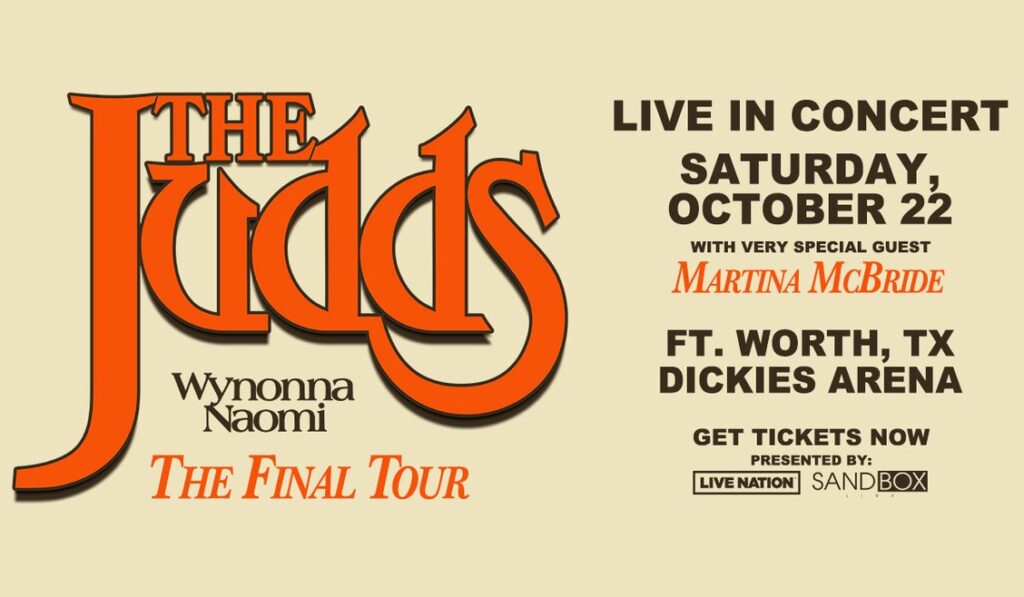 The Judds to Perform at Dickies Arena

Fort Worth, TX – Today, GRAMMY-winning iconic duo, The Judds, announce their first tour in over a decade, The Final Tour.

The 10-date arena tour, produced by Sandbox Live and Live Nation, will stop in Fort Worth at Dickies Arena on Saturday, October 22 with very special guest Martina McBride.

“The fans have always been my family of choice. I love them dearly, so I’m chompin’ at the bit to belt out our hits and reconnect with them once again. The cherry on top is singing with my beloved, wild and extremely talented daughter… the best singer of any genre, Wynonna! She asked me if I was still going to twist, twirl and crack jokes. I answered, “Heck yeah! I’m too old to grow up now!” Naomi shared.

“What I’m looking forward to most is celebrating Judd music with the fans. Mom and I have had quite the journey over the last 38 years, and the fans have been with us through it all. This tour is a celebration for them!” said Wynonna.

“The Judds were my very first concert and this is a full circle moment for us. Launching Sandbox Live with The Judds “The Final Tour” makes perfect sense. We are so proud to produce their epic return to live concerts with our partners at Live Nation and Leslie Cohea and the incredible team at Sandbox,” states Jason Owen (President and CEO of Sandbox).

The Judds are often celebrated for a rarely-interrupted stretch of 14 No. 1 hits when every single of theirs released by RCA landed in the Billboard Top 10; and a career that defined what it means to be individualists in the music business. The Judds dominated touring in the 80s with 20 Top 10 hits, have sold more than 20 million albums and blazed a trail for duos and women who have followed them.

Their stripped-back style revived the popularity of acoustic sounds in country music and opened up the genre for more traditional approaches.

In this article:concerts, Dickies Arena, featured, the judds
Up Next: