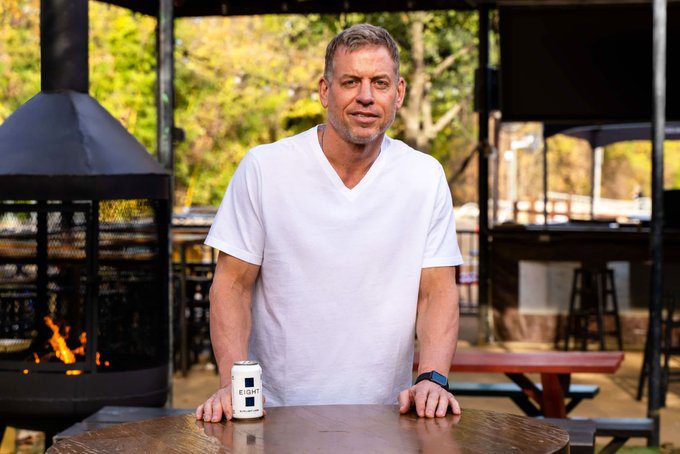 AUSTIN, Texas — Beginning in February, Texas consumers will enjoy an elite new player in the beer category: EIGHT, which features organic grains, antioxidant-rich Hallertau Taurus hops, no adjuncts or cheap fillers, and no sugars. As the newest offering in the light lager segment, EIGHT offers exceptional taste and refreshment at just 90 calories and 2.6g carbohydrates.

“EIGHT is for the drinker who consistently puts in the hard work. These folks, myself included, are conscious of what we put in our bodies, and options for a light, refreshing beer that’s brewed with organic ingredients are virtually non-existent,” said Aikman. “Taking the time to reflect and celebrate is critical when you’re constantly pushing yourself in pursuit of your goals. I hope EIGHT helps people connect with others after a day of doing things right.”

Whether on the field or in the broadcast booth, Aikman has never shied away from putting in the work. The challenge to develop EIGHT was not a small one. After two years of research and trial, including a partnership with Oregon State University’s distinguished Food Science and Technology Department, Aikman and his team at EIGHT developed a light lager that fit his standards for quality ingredients and flavor.

“I’ve learned that I’m a better father, friend, and athlete when I am eating and drinking well. I know a lot of people feel the same way,” said Aikman. “Being ‘healthy’ is a balance between physical, mental and emotional wellbeing. I use physical exercise to reduce my stress and support longevity, and practice good nutrition and clean eating to maintain my lifestyle. When it comes to grabbing a beer though, I found that my options were limited. If EIGHT hits the market and offers drinkers an option they don’t need to make excuses to enjoy, that will be a huge win.”

Always lauded for being a team player, Aikman worked with some of the best minds in brewing to formulate EIGHT. Tom Shellhammer and Jeff Clawson led R&D efforts at Oregon State, aided by award-winning brewmaster Phil Leinhart, a beer veteran whose resume spans the brewing spectrum, including Anheuser-Busch, Harpoon Brewery, and Brewery Ommegang. Doug Campbell, previously President of Brewery Ommegang and a long-time industry leader, joins Aikman as co-founder alongside Ruchi Desai, a seasoned business and operations leader, and Jake Duneier, an entrepreneur and brand strategist.

“Our team at Oregon State strives to be at the cutting edge of food science research, with a particular emphasis on using better ingredients to positively impact the quality of beer. The formulation of EIGHT required a lot of time, trial and error, and hard work, but we are tremendously proud of the end result,” said Shellhammer.

EIGHT launches on draft in bars, restaurants and other on-premise accounts in Aikman’s home state of Texas in February. EIGHT cans will arrive in retail locations across the state beginning in March, in 6-packs, 12-packs and 19.2oz single serve cans.