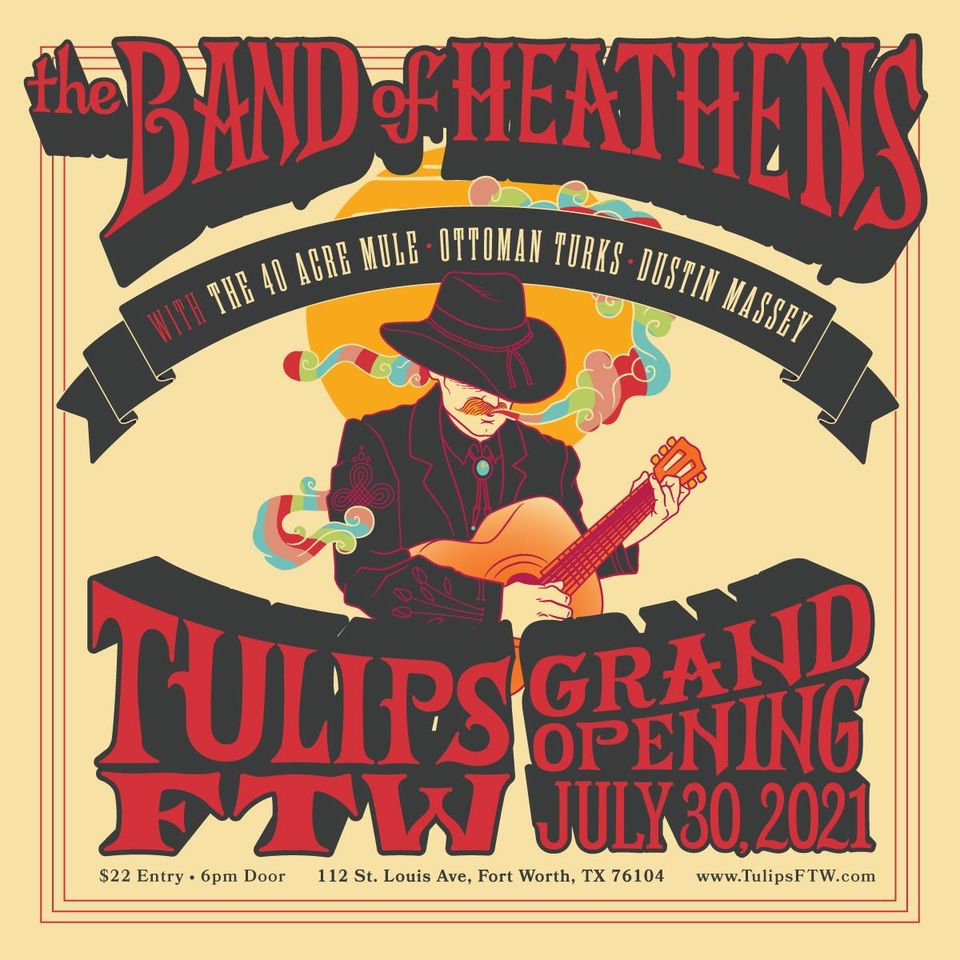 Tulips FTW is opening this summer as the first mid-sized music venue the city has seen since the days of Caravan of Dreams, and will finally route favorite musical acts to the western side of the metroplex. As the city nears a population of 850,000, we have stayed confined to local acts being staged at a circuit of favorite bars, but the touring acts worth higher ticket prices still skip us for Dallas. The market is here, but until now, the option hasn’t been. Tulips FTW will remedy this shortcoming.

These stewards of Americana music have been compared to Little Feat, Black Crows and the Grateful Dead. Tulips will follow up Band of Heathens with a man described by Rolling Stone as a “Cosmic Indie Guitar Hero”. See you in September for Kurt Vile!

Tickets for both shows are already available on TulipsFTW.com with a varied roster of regional, national and local musical acts from Texas Country to Latin, Funk, Hip-Hop, Indie and the rest of the audible world to follow.

About The Band of Heathens:

Sometimes it’s the “happy accidents,” rather than elaborately laid plans, that lead to something lasting, and that’s precisely the case with award-winning Austin rock and roll stalwarts, The Band of Heathens.

“It’s really funny how the loose, tequila-fueled weekly side-project that started almost 14 years ago has evolved into what the band is today,” singer and songwriter Gordy Quist says with a laugh as he recalls the band’s road to success.

But planned or not, the band has enjoyed sustained success for more than a decade, racking up 10 albums and more than twelve hundred performances in thirteen countries. Quist and Ed Jurdi, the band’s other principal singer and songwriter, are the only founding members still in the group that first came together in 2005. The core lineup of Jurdi and Quist on guitars and lead vocals, were joined by Trevor Nealon on keys in 2009 and Richard Millsap on drums in 2012. Bassist Jesse Wilson came on board in 2017.

Despite a few changes in personnel along the way, one thing has remained constant for the band. “The thing we always set out to do was to make timeless music, timeless records,” Jurdi says. “Not what’s fashionable or what’s trendy, but what inspires us.”

“As the band was getting together and going, Gordy and I seemed to have similar focus in terms of what our ambitions were for making music and taking it beyond the confines of what we were doing, presenting it on a bigger level,” Jurdi continues. It’s not just writing and performing the songs, there are endless choices that go into establishing the right aesthetic and tone for the presentation of the entire band, both on stage and in our recordings.”

The Band of Heathens’ first two releases were live recordings and the funky, soulful, rootsy sounds on those live records would come to be the band’s hallmark. “People say, ‘What kind of music do you play,’ and we say, ‘Rock and roll,’” Quist says. “And it’s always like, ‘Oh, rock?’ ‘No, not rock, rock and roll, with the roll in it.’ Because the roll implies a groove and a funkiness that modern rock just does not have. … We’re a rock and roll band.”

Between 2008 and 2016, The Band of Heathens released five studio albums, four of which went to either number one or number two on the Americana Radio Albums Chart, and earned a pair of Americana Music Awards nominations. Then in 2018, they released the acclaimed A Message from the People Revisited, a recreation of the legendary 1972 Ray Charles album, A Message from the People.

Also in 2018, Quist and a friend purchased The Finishing School, a studio in Austin where the band had frequently worked, after the passing of the studio’s owner, their longtime friend and producer, George Reiff.

“We’re really fortunate to be in a position to have access to a creative workspace like The Finishing School. It’s allowing us to take the final step in realizing some greater creative vision. We’ve laid down about 15 new songs over the past several months, with plans for some of this material to be included on a full length album in 2020, says Jurdi.