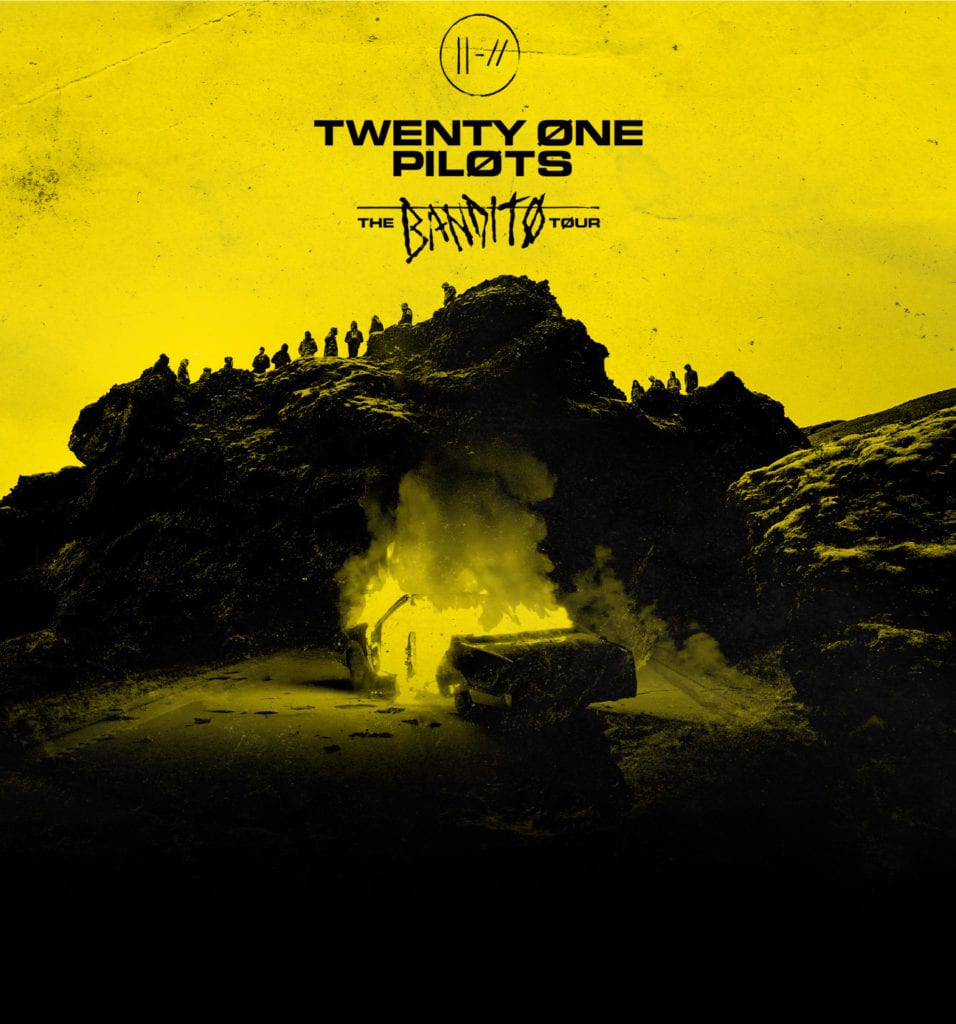 GENERAL PUBLIC ON SALE FRIDAY JULY 19TH AT 10AM

PUBLIC ON SALE TICKETS WILL BE AVAILABLE AT LIVENATION.COM

TRENCH AVAILABLE AT ALL DSPS AND WWW.TWENTYONEPILOTS.COM

JULY 11, 2019 – Twenty One Pilots have announced a new U.S. leg of their global headline “Banditø Tour” due to overwhelming demand.  The new Live Nation-produced tour dates, which follow this summer’s sold-out arena run, are set to kickoff October 9th at Tampa, FL’s Amalie Arena and will continue through a performance at Tulsa, OK’s BOK Center on November 9th.  To ensure tickets get in to the hands of fans and not scalpers or bots, the tour has partnered with Ticketmaster’s Verified Fan platform. Fans can register now through July 14th at 10:00PM PT atwww.twentyonepilots.com/banditotour. Registered fans who receive a code will have access to purchase tickets before the general public starting on July 16th at 10:00AM local time through July 18th at 10:00PM local time. All remaining tickets for the new U.S. dates will be released to the public at 10:00AM local time on Friday, July 19th.  For complete details and ticket availability on Twenty One Pilots’ “Banditø Tour,” visitwww.twentyonepilots.com/banditotour.

Earlier this year, the Twenty One Pilots shared an official music video for “Chlorine,” which is directed by longtime collaborator Reel Bear Media and streaming now on the band’s YouTube channel. “Chlorine” is featured on Twenty One Pilots’ acclaimed LP TRENCH, which made a stunning global impact upon release this past October.  The RIAA gold certified collection earned the GRAMMY® Award winning duo of Tyler Joseph and Josh Dun their biggest sales week ever in the U.S., with 175,000 units sold in its first week. An extraordinary achievement for the Columbus, OH band who moved 135,000 copies of TRENCH in pure album sales without the aid of a ticket / album bundle for their worldwide headline “Banditø Tour.” TRENCH — with over 52 Million on-demand audio streams its first week — also marked the largest streaming week (debut or otherwise) in the U.S. for a rock album.  A true global phenomenon amassing 110 Million streams worldwide in its first week, TRENCH earned Twenty One Pilots Top 5 chart debuts around the globe including the U.S., U.K., Belgium, Canada, Finland, Germany, Ireland, Italy, Norway, Scotland, and Sweden, with #1 debuts in Australia, New Zealand, and The Netherlands. TRENCH is available worldwide at all DSPs and www.twentyonepilots.com.

TRENCH is highlighted by the #1 Alternative smash “Jumpsuit,” which became the decade’s fastest rising song to reach #1 on Billboard’s “Alternative Songs” chart, and also earned the duo their fourth GRAMMY® nomination (Best Rock Song). TRENCH also features album standouts “Nico And The Niners,” “Levitate,” and “My Blood,” which is accompanied by a Tim Mattia directed music videos streaming now on the band’s official YouTube channel and all other providers.

Twenty One Pilots’ TRENCH follows the Twenty One Pilots’ global breakout BLURRYFACE, which made a stunning chart debut upon its initial release, entering the SoundScan/Billboard 200 at #1. The album also achieved a milestone unrivaled in the digital era, becoming the first album in which every individual song on the album certified Gold, Platinum or multi-Platinum by the RIAA.

BLURRYFACE spawned a series of hit singles, beginning with the 2x RIAA platinum certified “Tear In My Heart” and followed by the #1 sensations, “Ride” (5x platinum certified) and the 7x platinum certified, GRAMMY® Award-winning “Stressed Out.” The latter track – which reached #2 on Billboard’s “Hot 100” – spent three months at #1 at Modern Rock while also topping the charts at CHR/Top 40 and Hot AC. “Stressed Out” was a worldwide breakthrough for Twenty One Pilots, earning gold, platinum, and multi-platinum certifications in countries spanning Australia, Austria, Belgium, Canada, Denmark, France, Germany, Italy, New Zealand, Norway, Poland, Switzerland, and the United Kingdom. The “Stressed Out” companion video was an equivalent success, now boasting over 1.8 billion views at YouTube alone.

FOR MORE INFO AND TICKETS VISIT: